Widespread misunderstanding regarding the proper use of certificates of insurance has led to new changes relating to their use that will become effective July 1, 2012, according to Virginia’s Bureau of Insurance. 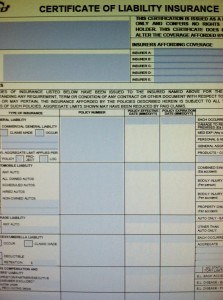 Earlier this year, during the Virginia Acts of Assembly, an act to amend the code relating to unfair insurance trade practices regarding certificates of insurance was approved.

According to Joe Hudgins, vice president of education and technical affairs for the Independent Insurance Agents of Virginia, many of the association’s members received multiple requests generated out of the construction business.

One example included a member agent who received a request to add language to the certificate indicating there were no exclusions. While the insured wanted certain operations to be covered and meant that none of the operations were excluded, placing the phrase “there’s no exclusions on the policy that apply to construction” would mean the policy virtually had none.

Another example involved a contractor who demanded completed operations coverage be added to a commercial auto policy, threatening to hold back payment if it wasn’t.

In another instance, a certificate holder asked that an additional insured endorsement be added to a workers’ compensation policy, despite it being illegal to do so in Virginia.

“The leverage they have if an agent doesn’t put something on the certificate that’s false or misleading is their insured won’t get the contract or they’ll get kicked off the job, or they won’t get paid for work already done. So it’s become a huge problem,” said Hudgins, of the bill he and Bob Bradshaw, president and CEO of the association, helped write.

“What can happen, obviously, if I put something on a certificate that’s not covered and I give it to you, even though that certificate is not a contract, something happens, you can go to court and rely on that certificate and possibly…the judge might tell the insurance company ‘hey, your agent said it’s covered – pay it’ and the insurance company then sues the agent, the agent is bare because that’s an intentional act and E & O doesn’t cover them,” Hudgins said.

Hudgins and Bradshaw approached Virginia Senator John Watkins and Delegate Tom Rust to have the bill introduced to the Virginia General Assembly, where it passed unanimously.

As a result, section 38.2-518 Certificates of Insurance, was added to the insurance code. The new section provides a detailed definition of what a certificate of insurance is and applies to all certificates issued in the state of Virginia.

In addition, the newly created section outlines the terms of use to include:

B. No person shall issue or deliver any certificate of insurance that attempts to confer any rights upon a third party beyond what the referenced policy of insurance expressly provides.

C. No certificate of insurance may represent an insurer’s obligation to give notice of cancellation or nonrenewal to a third party unless the giving of such notice is required by the policy.

E. No person shall knowingly demand or require the issuance of a certificate of insurance from an insurer, insurance provider, or policyholder that contains any false or misleading information concerning the policy of insurance to which the certificate makes reference.

F. No person shall knowingly prepare or issue a certificate of insurance that contains any false or misleading information or that purports to affirmatively or negatively alter, amend, or extend the coverage provided by the policy of insurance to which the certificates makes reference.

“The biggest thing that we were after was that a certificate holder…can’t bully an agent into putting something on a certificate that’s not covered in order to help their insured get a job, keep a job or get paid for a job,” Hudgins said. “Our intent was to get our agents out of harm’s way.”

Virginia isn’t the only state to take action to enforce strict certificate of insurance requirements, the National Conference of Insurance Legislators (NCOIL) voted unanimously this year to explore a new statutory approach to address how an insured proves insurance to third parties. NCOIL plans to draft a proposal later this summer in conjunction with the already-introduced Certificates of Insurance Model Act.

According to an NCOIL statement, “as introduced, the draft Certificates of Insurance Model Act would require insurance department approval of all certificate forms, mandate “info only” disclosure and prohibit altering a certificate or using false or misleading data. The model, sponsored for discussion by Rep. George Keiser (ND), would ban reference to third party contracts and stress that a certificate confers no rights beyond what the policy says.”