A New Jersey woman who was struck in the face with a baseball at a Little League game is suing the young catcher who threw it. 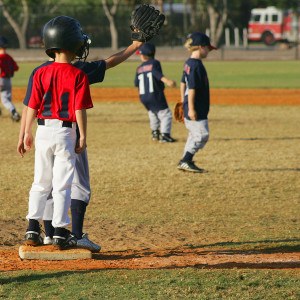 Elizabeth Lloyd is seeking more than $150,000 in damages to cover medical costs stemming from the incident at a Manchester Little League game two years ago. She’s also seeking an undefined amount for pain and suffering.

Lloyd was sitting at a picnic table near a fenced-in bullpen when she was hit with the ball.

Catcher Matthew Migliaccio was 11 years old at the time and was warming up a pitcher.

A second count alleges Migliaccio’s actions were negligent and careless through “engaging in inappropriate physical and/or sporting activity” near Lloyd. She continues to suffer pain and anguish, incur medical expenses and has been unable to carry out her usual duties and activities, the lawsuit says.

And Lloyd’s husband, in a third count, is suing for the loss of “services, society and consortium” of his wife. They’ve demanded a jury trial.

Anthony Pagano, a lawyer for the Migliaccios, said the lawsuit is frivolous and without merit.

“I just think that it’s disgusting that you have people suing an 11-year-old kid for overthrowing his pitcher in the bullpen,” Pagano said. “t’s horrible this can actually happen and get this far. Ultimately, hopefully, justice will prevail.”

The count alleging negligence and carelessness is covered by homeowner’s insurance, Pagano said, but the other counts are not. Little League has denied any coverage.

Lloyd’s lawyer was out of the office Friday and could not be reached for comment.

Steve Barr, a spokesman for Little League, declined to comment on the litigation. He said each local league is required to have accident insurance, but that only covers personnel.

“That includes coaches, players, even concession stand workers. But it does not cover spectators,” Barr said.

Matthew’s father, Bob Migliaccio, said they were concerned for Lloyd when it happened. Then his son started receiving threatening and nasty letters, he said, and he started getting angry.

“The whole thing has almost been surreal,” Migliaccio said. “We keep thinking it’s just going to go away, and then a week and a half ago a sheriff shows up at my door to serve my son the papers.”

Migliaccio said if his son had been horsing around, he would feel differently. But Matthew was doing what his coaches told him to do, he said, and noted Little League players aren’t always accurate in their throws.

“It’s absurd to expect every 11-year-old to throw the ball on target,” Migliaccio said. “Everyone knows you’ve got to watch out. You assume some risk when you go out to a field. That’s just part of being at a game.”

Migliaccio said he and his wife, Sue, would love to beat the charges in court, but it could cost them tens of thousands of dollars. They also don’t want to put their son and other kids on the team through all the questions and depositions a trial would bring.

“It’s to the point now where we just want it to be over,” he said.

Matthew, described by his father as a “baseball junkie,” still plays on three different teams. But Migliaccio and his wife have stepped down from coaching and managing the concession stand because of the suit.

Migliaccio said as angry as he is about the lawsuit, he’s almost more angry with Little League. He said they’ve volunteered hundreds of hours over the years, and he believes Little League should assist in defending their son.

“Somebody else has to step in here and help us out,” Migliaccio said. “I just feel people should know about this, and maybe Little League can figure out a way to protect these kids.”