When people think of hurricane damage they usually think of Miami or New Orleans, but a new report suggests the greatest financial risk of all may be much farther north: the greater New York City area. 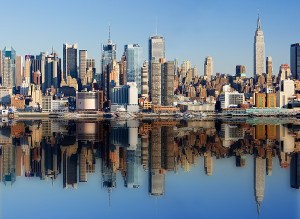 Data analysis firm CoreLogic said in a new report that the U.S. metropolitan area at greatest risk, both in the number of properties affected and the potential value of damage, was New York City. For the firm’s purposes, the area also includes Long Island and northern New Jersey.

“The summer of 2011 gave us some startling insight into the damage that even a weak storm can cause in the New York City metro area,” CoreLogic vice president Howard Botts said.

“Hurricane Irene was downgraded to a tropical storm as it passed through New Jersey and New York City, but the impact of the storm was still estimated at as much as $6 billion.”

Still, the risk is there, particularly from flooding. While most people associate hurricane damage with wind, the storm surge from rising waters caused by cyclones has just as much impact, if not more.

That was painfully evident to residents of the northeastern states in particular after last summer’s Hurricane Irene. Although the insured impact of Irene on the New York City area was relatively limited, one of the insurance industry’s nightmares has always been a major hurricane traveling up the Hudson River and striking the city and its environs.

By some estimates, such an event could cause $100 billion just in insured losses, with economic damage some order of magnitude greater than that.

CoreLogic estimated the property at risk in the New York City area was worth some $168 billion.

In total, CoreLogic said, more than four million homes in the United States are at risk from flood damage related to hurricanes, with over $700 billion in property potentially vulnerable.

About 35 percent of the at-risk homes are in the state of Florida alone and another 12 percent or so in Louisiana, the firm said. In terms of value of property, more than 40 percent of the risk is concentrated in Florida and New York.