Tattoo artist Michelle Brown snapped on a pair of blue gloves, reached for a pair of tongs and lifted the lid of a machine used to steam ink out of tubes.

Brown took the tubes from the autoclave – which sterilizes tattoo equipment – and put them in bags to be dried out in another machine across the room under a sign that reads, “Sterile Equipment Only!”

It’s a lengthy process that requires precision and organization, but Brown said it’s worth it.

“You’re putting something in your skin,” she said.

Her staff also opens all single-use needles from sterile packaging in front of customers and uses bag barriers and fresh ink cups to keep things clean in the shop, York Ink, on East Market Street in York.

If a tattoo business doesn’t take those safety precautions, a customer risks getting anything from skin lesions all the way up to HIV/AIDS, according to federal officials.

But Brown and her staff – and other tattoo or piercing artists in the state – don’t have to do any of it, according to the state of Pennsylvania. 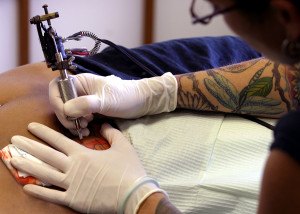 While you have to have a license to be a speech therapist, nail technician, funeral director or auctioneer, among other trades, there are no license or certification requirements to tattoo or pierce someone, said Mathew Keeler, a spokesman with the Pennsylvania Department of State, which handles occupational licensing.

“They do not have the authority to monitor or inspect them either,” he said.

The only law regarding tattooing or piercing in Pennsylvania states that minors cannot be tattooed or pierced without parental consent.

There’s currently no push to regulate or license tattoo and piercing studios in the state, Keeler said.

It’s completely up to the consumer to make sure a procedure is safe, said Paul Sorrels, who owns 717 Tattoo & Body Piercing Studio, based in Highspire, Dauphin County.

“It is important to educate yourself before choosing a studio,” he said.

Like York Ink, 717 Tattoo takes safety seriously, sending autoclaves out for inspection each year and buying equipment from a company that markets heavily to shops in highly regulated states, Sorrels said.

Checking the walls, floors and air quality of a shop are a must, Sorrels said, and customers can use clandestine measures to check things out.

“While you’re at the shop, use the bathroom,” he said. “This will give you a chance to inspect the cleanliness of the shop behind a closed door.”

Brown has owned the shop for four years, she said. As a licensed practical nurse, she understands the importance of safety when dealing with body modifications, such as tattoos and piercings.

“This place used to be a man cave,” she said, laughing.

Now, all staffers have CPR and have taken bloodborne pathogen training, Brown said. The shop is also a member of the Lawrence, Kan.-based Association of Professional Piercers, which has strict safety requirements for members.

For example, according to its website, potential members must send in a narrated, unedited 360-degree walk-through video of their entire studio, photographs of all applicants’ autoclaves with make, model and serial number printed on the back of the photo, and copies of the two most recent biological spore test results from all autoclaves.

However, relatively few people ask about safety when they get something done, she said.

Jasmine Hines, of York, likes that York Ink takes extra safety precautions. She was with her friend, Yasmin Perry, also of York, to watch Perry get a butterfly tattoo.

“I always make sure to watch them open the needles,” she said.

Missy Miller, of Lebanon, took a lot of precautions when deciding where to get each of her five tattoos done, she said.

“Word of mouth helped me and actually asking folks I met that have tats if they were satisfied with the quality,” Miller said. “I also went to the shops and just looked at the artwork and watched a bit if there was a client being worked on.”

Richard Dabb, a plastic surgeon with the Center of Aesthetic and Reconstructive Surgery of York, at Apple Hill Medical Center, would second that sentiment.

When safety isn’t a priority, plenty of things can go wrong, he said.

“The question you ask yourself is, are you going to someone who’s truly reputable,” Dabb said.

And it’s not just unsanitary needles that people need to be aware of. He’s also seen plenty of patients who need tattoos removed due to allergic reactions to the ink, called “chronic allergic dermatitis of the skin,” he said.

One of the jobs of the U.S. Food & Drug Administration is to make sure color additives in products “are used safely and appropriately,” according to an FDA presentation given last ear. But while the pigments used in the inks are considered color additives, “due to other public health priorities,” the agency does not regulate or approve tattoo inks, according to its website.

“Always have a test patch of the tattoo (ink) done,” Dabb said.

In addition to allergies to various ink pigments, infections from dirty needles, like hepatitis and HIV, scarring, granulomas and MRI complications are also risks from tattoos, according to the Food and Drug Administration.

According to the Association of Professional Piercers, piercings can also lead to:

And people need to make sure they’re thinking long-term, for both medical and aesthetic reasons, Dabb said.

“When people enter into this it’s the decision they ought to not take casually because the long-term impact is permanent,” he said.

That’s what Miller, who said she does not regret any of her tattoos, also recommends.

“I waited until I was 35 years old to get my first tattoo,” she said. “I thought for many years about it and reached a point in my life that I knew I truly wanted one.”

“Being too careful and sure is not a bad thing,” she said.