The agency that oversees state-run swimming pools said Friday it would keep pool slides closed this summer and called for creation of a full-time aquatics division after completing a 10-month review of policies and procedures that began after a woman drowned. 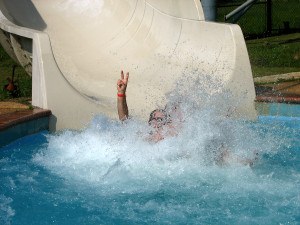 The body of Marie Joseph, 36, went unnoticed for two days at the bottom of the murky Vietnam Veterans Memorial Pool in Fall River while other people continued to swim. It was found June 26.

An investigation into her death previously determined that Joseph bumped into a child after coming down a slide, resurfaced for a moment, then slipped below the surface again. Investigators said lifeguards on duty at the crowded pool were momentarily districted by some other swimmers and did not see Joseph go under.

Officials said staff of the Department and Recreation, which oversees state pools, made a mistake by opening the Fall River pool despite poor water clarity that day.

The department’s commissioner, Edward Lambert, said in a letter Friday to Secretary of Energy & Environmental Affairs Richard Sullivan that the review pointed to an “inadequate approach to pool management,” caused in part by an agency culture that placed a low emphasis on pool oversight.

“While this report recommends physical improvements to the Fall River pool, more importantly, it seeks to correct any system-wide conditions that may have allowed the staff … to operate as it did,” Lambert wrote. “We will act to ensure that the circumstances described in this report are prevented from recurring in the future.”

While the slide itself was not deemed to be a direct factor in Joseph’s death, the agency said it would not reopen that slide nor allow any other slides at state-run pools to be used this coming season. Lambert said the state would await the results of a federal review of the safety of pool slides before deciding whether to allow their use in the future.

Other recommendations included the creation of a full-time aquatics division and the hiring of 20 additional seasonal lifeguards around the state, along with a new system of compliance checks.

The department will also speed up a pool modernization program, started five years ago, which includes a reduction in the depth of state-run pools. Each summer, more than 10,000 swimmers use the 25 deep-water pools and 14 wading pools managed by the Department of Conservation and Recreation. Some of the pools are 40 to 50 years old.

Joseph’s death was ruled an accident and no charges were filed in connection with the death. But two former state recreation managers were later charged with reckless endangerment of a child for allowing youngsters to swim in the cloudy pool.

Brian Shanahan and Jeff Carter admitted to sufficient facts in February and their cases were continued without a finding for a year. If they are not convicted of any new crimes during that period, the charges will be dropped.