Bicycle riders from across the state have called on New Jersey Transit to reverse its policy about carrying bikes on trains, which the cyclists say leaves most of them stranded at the station. 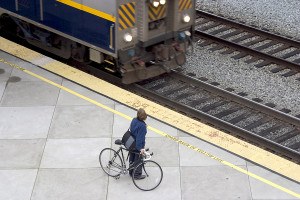 The policy – allowing bikers to bring their wheels onto trains only at stations with high-level platforms – is particularly distressing to bikers in Bergen and Passaic counties because most stations have low-level platforms, said Andrew Besold, one of 150 biking enthusiasts who participated in the New Jersey Bike and Walk Summit held Saturday at the Voorhees Transportation Center at Rutgers University.

Besold, a biking instructor and author of the blog, “WalkBikeJersey.blogspot.com,” maintained that NJ Transit’s 2009 bike policy allowed riders to carry bikes up and down the stairs at low-level stations, and only warned bikers that they would not receive assistance.

“It did not say anything about not being able to bring it up or down a low-level platform, which are the majority of the ones in Bergen County,” said Besold, who is leading a petition drive to force NJ Transit to reverse the policy.

The summit brought together biking advocates, policy-makers, legislators and transportation planners from NJ Transit and the New Jersey Department of Transportation, among other agencies, to discuss various biking issues, including designing biker and pedestrian-friendly streets.

Also discussed was proposed legislation that would require motorists to give bikers a three-foot buffer.

Ramsey resident Jim Nicholson, executive director of the New Jersey Bike & Walk Coalition, said this is the third such gathering; the first two were held in Denville and Trenton, and it is largely an opportunity to networking and provide education.

Bikes on trains was a hot topic at the summit.

System-wide, NJ Transit has 96 stations with low- or ground-level, stations, and 60 high-level stations where riders can board a train without having to climb stairs, said Penny Bassett Hackett, spokeswoman for NJ Transit.

Kevin O’Connor, head of NJ Transit’s rail division, said there had been no shift on the rule limiting bikes to high platforms. Rather, he said, the rule was clarified because there was confusion among riders and conductors.

O’Connor said bikers carrying bikes onto trains from the ground, or low-level platforms, pose a safety hazard both for the biker and for other passengers because the cyclist must wheel the bikes past them at head level.

He said riders had been able to carry their bikes onto trains at low-level platforms because both riders and conductors were confused. The policy was clarified to prevent ambiguity, O’Connor said.

Clifton resident David Joseph said he had been boarding trains with his bike at the Delawanna Station in Clifton for more than a decade, but last summer, for the first time, two conductors refused to let him board with his wheels because the station has a low level platform.

He said he was forced to ride his bike to a station in Harrison where he was allowed to board with it.

At NJ Transit’s Feb. 8 board meeting, Transportation Commissioner Jim Simpson said his office had been bombarded with letters from bikers. He directed the agency’s advisory committee – the North Jersey Transportation Advisory Committee – to review the policy and provide recommendations to the full board.

Bassett Hackett said the board will look at safety issues, as well as policies in other transit agencies.