Hartford, Conn., is trying to recapture its status as the nation’s insurance capital by drawing in a specialized insurance business that is finding a home elsewhere.

Since the 18th century, Hartford – home to Aetna Inc., Cigna, The Hartford, Travelers Cos. and others – has been synonymous with insurance. Even Hartford’s skyline is dominated by the 34-story granite Travelers tower built in 1919. 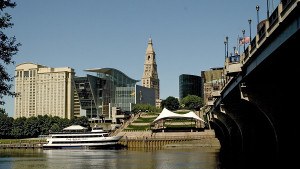 But as the industry fragmented and companies merged and sold units and shifted headquarters to other states, Connecticut’s luster as the insurance leader dimmed.

Now Gov. Dannel P. Malloy is looking for something new in one of the state’s oldest industries. His budget proposes to establish a division in the Insurance Department to regulate companies that specialize in captive insurance, a form of self-insurance.

The legislature established the division in the Insurance Department and Malloy now wants it staffed. He and lawmakers also hope that developing a captive insurance industry – following the lead of many other states – will establish much-needed jobs. Connecticut already is home to thousands of insurance workers who can quickly fill new industry jobs, say state officials and industry representatives.

To help lure new companies, Malloy wants the legislature to establish a $7,500 tax credit for a captive insurer’s first year in business and modify certain requirements.

It’s part of his plan, he said in a speech to the General Assembly this month, to make Connecticut “home to a reinvigorated insurance industry.”

Agency staff would rise from 141 to 159, up 13 percent. That’s still far less than the staff level of about 180 in 2000, Insurance Commissioner Thomas Leonardi said.

“We still believe we’re the No. 1 insurance state, and we want to continue,” Crisco said. “What can we do more to improve our position?”

Marketing efforts to bring captive insurance companies to Connecticut will be drawn up by the Insurance Department and state Department of Economic and Community Development, Leonardi said.

The Insurance Department reviews rate requests by insurers for individual and employer health plans. The agency’s financial regulation division monitors the financial condition of domestic and foreign insurers, health care centers and fraternal benefit societies authorized to do business in the state.

The number of jobs at insurance carriers, agencies, brokerages and related businesses in Connecticut has dropped 29 percent, to 59,663 between 1990 and 2011, according to the state Department of Labor.

Malloy has before made insurance jobs an issue. Cigna announced in July that it will add at least 200 jobs in the next two years at its Bloomfield site in exchange for a $50 million package of tax credits offered in legislation pushed by Malloy.

The state has not offered tax breaks or other inducements, but provides a “stable, predictable” business environment, he said. The result is $23 million a year in revenue from a tax on premiums and 1,400 accountant, lawyer, actuary and other jobs, Provost said.

“Part of the reason it’s so successful is because we’re so small,” he said. “A few jobs and a few dollars in taxes make a difference.”

Leonardi said that despite job losses in Connecticut, the state is still near the top in the number of insurance premiums written, surpassed only by New York. He and others who promote the industry also say the state is home to a deep pool of talent of actuaries, financial analysts and other specialists in all insurance fields.

Hartford still has a national reputation for insurance, but “not to the same degree it once did,” said Robert Hartwig, president of the Insurance Information Institute, an industry group.

Captive insurance is one area where Connecticut has not done well in drawing insurers to the state, said Peter Kochenburger, executive director of the Insurance Law Center at the University of Connecticut.

“There’s always a need to reinvent yourself. You lose your edge if you don’t,” he said.