It was a perfect day for skiing at Sugarloaf on fresh powder left by a December snowstorm the day before. But something seemed amiss as Rick Tonge and his son rode a chairlift up the mountain. First he heard some banging and clanging. Then the lift stopped and started several times. 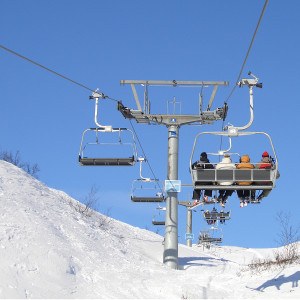 As they dangled about 30 feet above ground, Tonge noticed a mechanic working on one of the lift towers. Their chair moved closer, and Tonge’s eyes widened – the grooved wheel assembly that holds the lift cable in place was crooked.

Moments later, Tonge and his son plunged to the ground.

“They’re lucky people didn’t get killed,” said Tonge, who hurt his back in the fall a year ago. His 26-year-old son spent months in a brace while recovering from a compression fracture of his spine. Six others were injured and taken to the hospital.

Though undoubtedly little comfort to Tonge and the others who were injured, ski lift accidents are rare and deadly accidents are even rarer. Industry experts say skiers are more likely to be injured or killed while driving to the slopes or skiing down the mountain than riding the lifts.

There have been 12 deaths attributed to ski lift malfunctions since 1973, and the last one happened 18 years ago, according to the National Ski Areas Association. Those include a 1976 ski lift accident that killed four people in Vail, Colo., and another in 1978 in Squaw Valley, Calif., that also killed four people

Jim Fletcher, a Colorado-based engineering consultant for ski resorts, said the onus is on resort operators to be careful with maintenance and operational training.

“This is an ongoing thing. You drop your guard, and you can get hurt,” Fletcher said. “Over the years, that’s what I see most – accidents being fostered by people not being vigilant.”

Each state regulates the maintenance and safety aspects of ski lift operations.

In the Dec. 28 accident at Sugarloaf last year, inspectors from the Maine State Board of Elevator and Tramway Safety could not pinpoint the cause of the cable popping out of its grooved track on the wheel assembly, sending chairlifts hurtling to the ground.

But they found signs of wear and noted a design modification to the 35-year-old East Spillway Lift. The lift itself was so old that the original maintenance manual was nowhere to be found. Other factors that played a role that day included high winds, and problems with maintenance and procedures.

They further noted that a Sugarloaf worker had to manually hit a button afterward to stop the lift from moving after a safety mechanism failed to work as intended.

The 56-year-old Tonge watched it all unfold as he sat next to his son, who was home for the holidays from Johns Hopkins University. As the lift stopped and restarted three times, Tonge saw the worker climb the lift tower, attach his safety harness to a loop, and then inch his way out onto one of the lift arms holding the crooked wheel assembly.

When the cable popped out of its track, five chairs plummeted onto the snowy mountain underneath. The other chairs holding another 150 skiers bounced like yo-yos.

“I’m fully cognizant of what’s going on, but there’s nothing I can do about it,” Tonge recalled. “You’ve got a sudden realization that you’re falling. It’s very real. I’m falling. And literally, I looked down, and I said, `This is probably going to really hurt, and I could get killed.”

When he hit the ground, Tonge’s skis popped off their bindings and he rolled backward out of the chair. His son remained in the chair and was dragged before the lift stopped.

Since the accident, Sugarloaf removed the East Spillway and another lift that ran parallel to it and replaced them with a modern $3 million quad-chair lift that went into service earlier this month.

Spokesman Ethan Austin said the state investigation cited lapses in documentation and maintenance practices, and the resort is renewing its focus on those areas moving forward. The resort also has added a new director-level position to oversee lift operations and lift maintenance, he said.

Over the year, the Ski Maine trade association and the Board of Elevator and Tramway Safety have been working together to enhance quality assurance programs at each of Maine’s ski areas.

“Maine has a very good track record of safety and it has a well-developed inspection and licensing program,” said Doug Dunbar, spokesman for the Maine Department of Professional and Financial Regulation, which includes the tramway safety board.

Maine has never recorded a death due to mechanical failure on a ski lift, Dunbar added.

The 35-year-old East Spillway lift was one of the oldest in Maine, part of an aging infrastructure at many resorts. Nationwide, most lifts were installed during the 1970s, 80s and 90s, and hundreds of old lifts remain in service across the country, industry officials say.

No organization keeps track of the age of aerial lifts at ski areas, nor is there any standard for how long they should remain in operation before being retired.

Fletcher said most ski lifts were originally designed for a lifespan of 20 to 30 years. He said they’re considered to “aging equipment” at 20 years and just plain “old” at 25.

An Associated Press review of inspection reports by the tramway safety board found that the average chairlift is 22 years old in Maine. A review of the annual reports, obtained under the Maine Freedom of Access Act, found that inspections typically uncovered relatively minor problems.

Spillway East was old but it passed its annual state-mandated annual inspection and was deemed safe to operate before it failed last December.

“There’s a risk in anything you do,” Di Nola said. “Considering how many millions of people ride on a particular lift over time, they’re pretty safe.”