During a fire, it is customary for local companies from surrounding towns to respond.

But if the fire occurs over the water, only a handful of companies in the southern New Jersey region are able to offer assistance, and local authorities warn that the lack of fire boats leaves the area vulnerable to a major fire on the water. 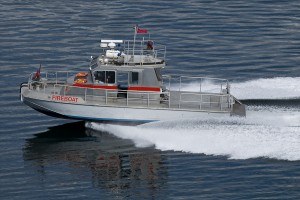 “The city is an island. It’s surrounded by water. There are several fires on the bay where we couldn’t get to the rear of the building,” said Dennis Brooks, chief of the Atlantic City Fire Department.

Brooks said the department has asked City Council to supply a boat, but they have been unable to fund the request. In 2009, a fire on the waterfront in the city’s Lower Chelsea neighborhood caused $1.5 million in damage, displaced 22 apartment residents and took three hours to extinguish.

That event also prompted calls for a fire boat.

“Anytime you can do something for the safety of the public, it’s a priority. But we’re in a budget crisis,” he said. “There was a possibility of grant money, but we’re not able to explore it. Right now, no one is interested in doing that.”

Bruce Funk, assistant chief of the Longport Volunteer Fire Department, said his unit is the only one on Absecon Island with a fire boat.

“Every five years, we have a bay fire and everyone says we should get a boat,” he said. “The problem with a fire boat is it’s another piece of equipment. For a city to spend that amount of money on a piece of equipment is tough, especially with how budgets are the way they are.”

Longport purchased its boat five years ago after a resident donated $30,000 for the 25-foot vessel, Funk said. They added a pump that can use 400 gallons of water a minute and has range of about 150 feet. The department has three or four firefighters operate the boat on a call, he said.

The boat has been used to fight fires, assist in searches and rescues, and provide support for events such as airshows in Atlantic City and Ocean City, Funk said.

Patrick Armstrong, fire captain of the Margate and Longport fire departments, said he has seen an increase in water activities and the need for water rescues. The boat is key in responding to situations that may arise.

Although Longport uses the boat to assist other departments, Funk said it is primarily used for borough calls.

“We are a fire department, not a water-based rescue operation,” Funk said. “Although it’s our boat, we reach out to other communities.”

Frank Denan, assistant fire chief for the Somers Point Fire Department, said the city and Longport often work together on fires. The two departments responded to a fire at the fishing pier under the Somers Point-Longport Bridge last summer that was caused by cigarette butts. Without boat access, the fire could have spread and caused a lot more damage, he said.

The boat allows the department to do rescues from water instead of coming in from land, Funk said. The Coast Guard and the state police Marine Services Bureau do rescues but are stationed in Atlantic City and Ocean City, so Longport is able to respond quicker, he said.

Other companies near large bodies of water, such as Stone Harbor, Sea Isle City, Town Bank in Lower Township, and Port Norris in Commercial Township, have boats for fires. Some companies near rivers have smaller boats for rescues or during flooding when residents need to be evacuated.

Avalon Volunteer Fire Department Chief Kevin Scarpa said the municipality raised about $100,000 to buy and retrofit a 25-foot aluminum former State Police boat at an auction in 2009. It replaced a boat they bought in 2000.

The department uses it for calls three miles from the shore for which they are responsible, Scarpa said.

“There’s not a lot of fire (calls), but if you’re responsible for water, you better have a boat,” he said.

Denan said that in 2009, Somers Point firefighters responded to a fire at the Seaview Harbor Marina during which a number of boats were on fire. But the blaze occurred during low tide at 1 a.m., and the boat could not reach the area, he said. The fire was put out by land, he said.

Local departments have to cover for fires in their area after the Coast Guard stopped its firefighting service about 10 years ago.

“When lives are in danger, we will immediately respond,” he said. “Fire is dangerous stuff. It requires long-term training to be done safely.”

“The Coast Guard created a big void that’s being dumped on local municipalities,” he said. “For years, the Coast Guard took care of it. But then they put it in the departments’ hands.”

Higbee said he is most concerned about boats traveling through the Delaware Bay. He said the area is a “bad accident” waiting to happen.

“The biggest problem is if an oil tanker has a major fire,” he said. “That would be a catastrophe. No way we would be able to respond to it. It would be impossible. Really at no time you can’t look out there and not see a big tanker or a barge. It’s very busy all year.”

Downe’s company raised about $30,000 to purchase a 25-foot parker boat two years ago. The department retrofitted the boat to add pumps. There are not many grants available for fire boats, he said.

“They are expensive pieces of equipment for something you do not have a lot of calls for,” he said. “We’re all struggling for the equipment we use every day.”