Far from the beach towns that took Hurricane Irene’s first hit, the storm inflicted some of its worst damage on inland farms as crops were pummeled by wind, scalded by salt spray and submerged by floodwaters. Some farmers are reporting total losses. 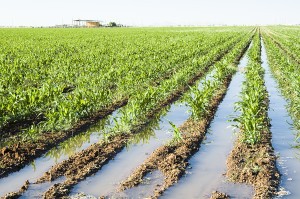 “My tobacco crop is completely wiped out. I can’t harvest any of it,” said Keith Beavers, whose Mount Olive farm lies about 70 miles from the ocean. “It’s either blown off the stalk or off the limb, and what’s left is raggedy.”

It could take days or weeks for federal agriculture officials to estimate overall losses, but the toll is already clear for many individual farms after a growing season that was too hot in the South and too wet in the Northeast. Especially hard-hit were tobacco growers preparing to harvest in North Carolina and Virginia – two top tobacco states – and blueberry growers in New Jersey whose damaged bushes could spell trouble for future harvests.

“I’ve not seen the kind of flooding and damage to crops that I saw briefly today,” Vilsack said. “And if this is representative of what North Carolina has suffered, it’s a fairly significant blow.”

Still, the storm hasn’t had a significant impact on the nation’s food supply or crop prices, an analyst said. While Irene damaged some East Coast farms that grow corn and soybeans, the top producing states for those crops are located in the Midwest. And aside from some pockets of damage, livestock operations appear to have generally weathered the storm well, including North Carolina’s large hog industry.

Also, most crops are shipped into and out of ports on the Gulf of Mexico and West Coast, meaning that much of the shipping infrastructure was far from Irene’s reach, said Jason Ward, an analyst with Northstar Commodity in Minneapolis.

Tobacco took some of the worst damage from Irene. In a normal year, most tobacco would have been harvested by now. But a brutally hot summer delayed development of the plants so that many farmers had 75 percent or their crop still in the fields.

“We’ll be lucky to harvest a third of our contracted amount,” said Jimmy Hill, who owns a farm near Kinston, N.C. He says this is the worst hurricane damage he’s seen in his 75 years.

The damage is worrisome in a state that grows more tobacco than any other. The crop is tied to around 255,000 North Carolina jobs and accounts for roughly $7 billion worth of business from sales to wages to purchases of supplies and equipment.

Across the state line in the No. 4 tobacco-growing state of Virginia, the crop was also badly damaged, along with cotton. Early estimates suggest the storm damage to crops could run to $20 million.

“The plants are leaning over, looking like a cat’s been scratching on the leaves,” said Virginia extension agent Taylor Clarke, who was checking tobacco fields in the southern part of the state. “They took a physical pounding.”

Cotton may have an easier time bouncing back, since this was to be a bumper year for the plant.

“Even if we lose 10 to 15 percent we’re still going to have a decent crop,” said Spencer Neale, a senior assistant director of commodities marketing for the Virginia Farm Bureau.

Blueberry plants were inundated in New Jersey, a state that produces more of the fruit than any other state except Michigan.

Although blueberry season ended before Irene hit, flooding could kill plants and affect harvests in years to come. Rutgers Agriculture Experiment Station Atlantic County agent Gary Pavlis says the berry’s root systems start to die in bushes that are in standing water for 27 hours. Some farms in southern New Jersey were still underwater on Tuesday, days after Irene made landfall.

“The ground was already saturated and there wasn’t a lot of places for natural storm surge to go,” said Paul Galletta of Atlantic Blueberry, who was still surveying damage at two farms he co-owns.

In Vermont, officials won’t be able to estimate the damage from massive flooding until the waters have begun to recede. But the state Agency of Agriculture said growers are facing flooded fields and barns, while dairy farmers have no way to transport their product over washed-out roads and bridges. Southern New England farmers appear to have weathered the storm well, particularly apple growers, who were collectively “breathing a sigh of relief” this week, according to Russell Powell, executive director of the New England Apple Growers Association.

In New York, agriculture officials were most concerned about field crops including feed corn and onions in the black dirt regions of the Hudson Valley. Fruit orchards and Long Island’s grape crops were largely spared.

“Some farms are completely under water,” said Peter Gregg, spokesman for the New York Farm Bureau.

Across eastern North Carolina, farmers were out Tuesday surveying the damage to fields. In Stonewall, Maurice Benton managed to harvest nearly 1,500 acres of his corn crop before Irene made landfall and sent a wall of water gushing over his fields. But he was left with 450 acres of corn and around 2,060 acres of soybeans underwater.

He thinks much of the waterlogged crops can be salvaged, but the storm adds further harm in a year aleady plagued by drought.

“We started out bad, but it gradually got worse,” said Benton, who’s been farming 35 years. “It’s a below-average year, but it’s not going to kill us.”

Not far from Benton’s farm, Charles Alexander raced to unload storage silos full of corn and wheat after floodwaters pushed several inches of water up into the bottom of the bins.

“It’ll swell, and when grain swells it has a tendency to bust the bin,” Alexander said.

With electricity out at his silos, like in most of the Pamilco County, Alexander first had to use a large vacuum tool hooked to a generator to suck his corn out of the silos and into the beds of trucks to carry it to market.

“We’ve had to improvise,” Alexander said. “I’ll save it. It’s just a little aggravating.”