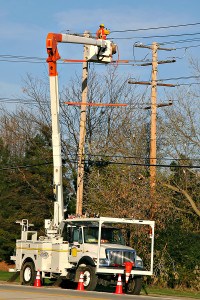 Bart Scott’s home in New Jersey has no power because of Hurricane Irene, and he’s unsure when the lights will go back on.

Still, the New York Jets linebacker considers himself one of the lucky ones. Several neighborhoods near the Jets’ facility in Florham Park were flooded when the storm hit the metropolitan area Sunday and have severe water damage, along with power outages.

“The other people need to be helped first,” said Scott, whose house in Mendham had no flood damage. “I’ll lose some food. I think a lot of my fish died. I’ve got a salt-water tank. Those are things that can be replaced.”

The Jets beat the Giants 17-3 in a preseason game Monday that was originally scheduled for Saturday night, and then pushed to Saturday afternoon before being postponed two days because of the then-approaching storm.

Scott said he’ll be staying in a hotel for at least five more days while the area recovers.

He felt for the people in other areas who are a lot worse off than he and several of his teammates.

“You’ve got people who lost things and lost property,” Scott said. “That’s more important than me having to sit in the dark a couple of days. I can go to a hotel and wait it out. It’s no big deal. Next time, I’ll have a generator and I’ll be fine. I’ll call all the people in Morristown and let them come up and pay rent.”

The Jets’ training facility also lost power Sunday, and is operating off an existing generator.

Areas critical to team operations, such as for coaching, and personnel, plus team meeting rooms, the training room and football video room are working with backup power. The Jets’ media relations and ticketing departments have been working out of the training facility.

The Jets briefly held meetings at the facility earlier Monday before they headed to MetLife Stadium for the preseason game. Starting Tuesday, the majority of the Jets’ business support staff will work out of the stadium.

Several of the Jets players who live near the facility are also without power, including right guard Brandon Moore.

“Some guys had some flooding in their basements, but a lot of guys were OK,” Moore said. “But I’m in Morristown, so it kind of hit them and shut them down there. We’ll be OK, though.”