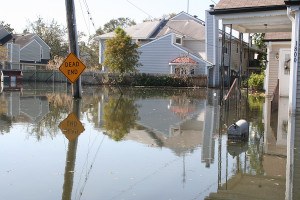 Three people were killed in flooding kicked off by the storm’s heavy rains and one remained missing, state authorities said. Several of the state’s historic covered bridges, as well as more modern structures, were washed away in rain-swollen rivers.

Irene had been reduced to tropical storm status by the time it reached Vermont but still dumped a near record 7 inches of rain. Officials called the flooding catastrophic and said it was the state’s worst natural disaster since floods in 1927.

Governor Peter Shumlin and Senator Patrick Leahy toured the devastation by helicopter and in cars. Crews spread out around the state to begin clearing downed trees, restoring power and rebuilding roadways.

On Monday, the land-locked New England state, known for its ski resorts and back-to-the-land vibe, received a federal disaster declaration from Washington, ensuring access to federal money to help clean up. Vermont is one of the states least insured for floods.

“I keep being somewhat disappointed by some of the national press that think because Manhattan wasn’t hit, everything is fine. We’re not Manhattan, but we have human lives here in Vermont, too,” Shumlin said, calling the storm’s damage shocking and devastating.

He and Leahy surveyed the Whetstone Studio for the Arts in Brattleboro, an artsy community of 12,000, along the Connecticut River. Gushing water ate away at the building and left its second floor dangling precariously over the flood.

By late Monday most of the state’s rivers had crested, but were expected to remain above flood stage through at least Tuesday, said William Hanley, a meteorologist with the National Weather Service in Burlington, Vermont.

Officials warned some of the 50,000 energy customers still without power might have to wait several days for electricity to come back on.

Three bodies had been found in waterways near Ludlow, Mendon and Dover and one person remained missing near Mendon, said Mark Bosma, a spokesman for the Vermont Division of Emergency Management.

LEAF SEASON LOST FOR SOME BUSINESSES?

In the state’s south, downtown Wilmington, Vermont, was cordoned off by police and military units after the Deerfield Valley river ravaged the town, rising a full foot above the line on town hall marking its previous record flood in 1938.

The timing could not be worse for a business that was ramping up for the fall foliage season, when tourist traffic rises sharply in the leafy state. “We had been up 28 percent for the year too,” Berg said.

By Monday morning, residents were detailing their misery.

Kevin Putnam, 45, was busy pumping out the basement of his parents’ home, after the floodwaters rose almost to their first-floor windows. “It was scary, there were giant boulders bouncing down the brook,” Putnam said.

After evacuating his parents from the home on Sunday, he returned to save their 15-year-old cat, Sophie, swimming across the backyard to do so. “She’s the meanest cat ever, but I had to do it,” Putnam said.

State offices, businesses and many schools were closed and officials urged residents to stay off the state’s storm-damaged roads. Emergency crews were headed to the worst hit areas in Rutland and Addison counties in the south and middle of the state.

Hurricane Irene started its sweep up the eastern seaboard in North Carolina Saturday, and appeared to have inflicted the greatest damage inland with its heavy rains in western Massachusetts and Vermont.

Overnight, nearly 300 roads in Vermont — including interstate highways Routes 89 and 91 — was closed down at some point because of flooding or downed trees, the emergency management agency noted.

“When I first walked through here last night, it was like a war zone, there were people in shock, who had lost everything,” said Rev. Emily Heath, of Wilmington Congregational Church.

She spent much of her day on the steps of the church, located within the town’s cordoned-off zone, giving water and solace to the few property owners authorities allowed in to survey the damage. “We’re in the hope business,” she said.