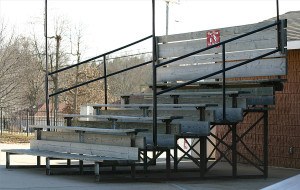 An inmate serving life in prison for murder is suing Pennsylvania’s Department of Corrections, claiming broken bleachers at a state prison led to a fall that left him injured.

The Centre Daily Times reports the suit filed on behalf of Guy Grazier claims he was injured when a rotted railing gave way in July 2010. The lawsuit claims corrections officials were negligent in not knowing the railing was a hazard and seeks $50,000 in damages.

A spokesman at Rockview state prison says Grazier filed an institutional grievance about the incident but declined to comment on the suit.

The Centre Daily Times report said Grazier is serving a life sentence for a 1981 murder in Allegheny County.