Officials on Hawaii’s Big Island let some people back into their homes and scaled down emergency operations Monday as lava flowed into the ocean on a path that wasn’t threatening new areas.

“We’ve pretty much thrown everything at this event” since a series of lava fissures began emerging from cracks in neighborhood last month, Hawaii County Civil Defense Agency Administrator Talmadge Magno said Monday. “Some aspects of it can kind of start to scale down as the volcano somewhat runs into a stable situation.”

His definition of stable means that lava continues to flow along a path toward the ocean that isn’t threatening new areas. It was flowing north and then east toward a community the lava wiped out last week.

Officials are transitioning to recovery efforts, with help from the Federal Emergency Management Agency, which is starting to do damage assessments, Magno said.

Lava has destroyed more than 600 homes.

There was “not a lot of change” to the lava flow, said Janet Babb, a geologist with the USGS’ Hawaiian Volcano Observatory.

Lava was shooting into the sky from one vent and there was “weak” activity at two other fissures, which weren’t producing much of a flow and not advancing very far, Babb said.

It’s possible a new fissure will open or vigorous flows could emerge from vents that have been inactive. Magno said additional workers can be called in if conditions change.

In the meantime, fewer workers are needed to staff a 24-hour operations center and officials are reducing checkpoints, Magno said. Half of the residents of a subdivision that had been ordered to evacuate after a fissure opened there on May 3 were being allowed to return starting last week. Only residents are allowed there. 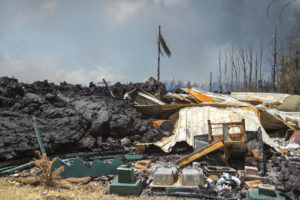 Pāhoa, Hawaii, May 19, 2018 – Home destroyed by lava during the Kīlauea volcanic eruption. The residential area of Leilani Estates has been evacuated and is monitored by local authorities with support from the Hawaii National Guard. Photo: Grace Simoneau/FEMA

The other half of the residents in a more vulnerable area are allowed back during the day if conditions are safe.

At Kilauea’s summit, there continues to be explosions that shoot plumes of ash into the sky. There were two small blasts Monday, including one after a magnitude-5.4 earthquake, scientists said.

A National Weather Service radar unit has been helping provide data about the heights of the ash plumes and the direction of ash fall. But the unit has been broken since Thursday. A part for repairs was expected soon, said Robert Ballard, science and operations officer for the weather service in Honolulu.

Ash expelled during explosions may cause poor visibility and slippery conditions for drivers.

Another ongoing hazard comes from lava meeting the ocean. Scientists warn against venturing too close to where the lava is entering the ocean, saying it could expose people to dangers from flying debris.