In an effort to put the brakes on sobering statistics related to teenagers driving under the influence, researchers at University of California San Diego School of Medicine will join forces with the San Diego Police Department (SDPD) to reduce alcohol-impaired driving among San Diego youth ages 15 to 20. 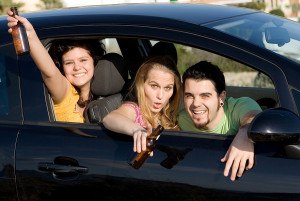 With funding from the California Office of Traffic Safety through the National Highway Traffic Safety Administration, the UC San Diego Training, Research and Education for Driving Safety Program (TREDS) will contribute to SDPD’s Teen Alcohol Awareness Program (TAAP) by implementing an evaluation component and delivering sessions to parents about how to most effectively communicate with their kids about drinking and driving. According to Mothers Against Drunk Driving (MADD), 74 percent of youth under age 18 identify their parents as the leading influence in their decisions about drinking.

“In a recent survey, one out of ten high school students admitted to driving after drinking and one in four had been a passenger with a driver who had been drinking. Parental involvement can help guide teens away from substance use while driving,” said Linda Hill, MD, MPH, program director of TREDS and professor of family medicine and public health at UC San Diego School of Medicine.

TAPP classes, hosted at police headquarters, educate teenagers and parents about the dangers and consequences of driving under the influence, as well as the responsibilities of social hosting and the penalties for violating current local ordinances.

To further support teens in making the right choice about drinking and driving, SDPD and Social Advocates for Youth (SAY) San Diego will collaborate with UC San Diego School of Medicine to deliver sober driving education at local high schools and implement a social media campaign focusing on prevention and intervention strategies.

“Alcohol-involved crash fatalities increased nearly 8 percent just last year and drug involved crash fatalities have increased nearly 14 percent in the past decade, according to the California DUI-MIS 2015 report,” said Nancy Gannon Hornberger, CEO of SAY San Diego. “We are honored to work collaboratively with UC San Diego TREDS and the SDPD on this new Sober Driving campaign. Together, we will involve parents and community members to reverse these trends and prevent such tragedy in the lives of young people and their families.”

“Working with TREDS will provide a broader reach for TAAP to provide expertise on substance abuse trends and related laws to our target demographics,” said Lieutenant Scott Bender of the SDPD Traffic Division.