A defect in a Toyota Motor Corp. Camry caused the vehicle to suddenly accelerate, leading to an accident that left one woman dead and another injured, a lawyer for the women told a jury at the start of trial.

The 2005 Camry driven by Jean Bookout, then 76, sped out of control as she was exiting from an Oklahoma highway in September 2007, according to her lawyer, Jere L. Beasley. Bookout couldn’t stop the car and it crashed, injuring her and killing her passenger and friend, Barbara Schwarz, 70, he said. 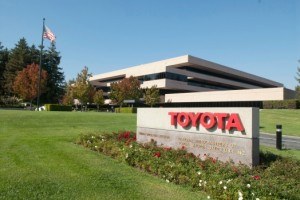 “Toyota had known since as far back as 2004 that they had a serious problem with sudden acceleration,” Beasley said in his opening statement at the trial in state court in Oklahoma City. “We’re talking about an automobile accident that occurred not because of anything the driver did or did not do.”

The lawsuit is one of several hundred claims filed against Toyota in state and federal courts in the U.S. contending that the company’s vehicles can inadvertently accelerate. The Bookout case is the first test of a claim that a flaw in the vehicles’ electronic throttle-control system is at fault.

There was no defect in the vehicle that would have caused the accident, J. Randolph Bibb, an attorney for Toyota, told the jury today.

“After taking the wrong exit toward an unfamiliar road, 76-year-old Jean Bookout made a mistake in the operation of her 2005 Camry,” Bibb said. He suggested that she may have pressed the accelerator instead of the brake as she left the highway.

The carmaker, based in Toyota City, Japan, recalled more than 10 million vehicles for problems related to unintended acceleration in 2009 and 2010, starting with a September 2009 announcement that it was recalling 3.8 million Toyota and Lexus vehicles because of a defect that may cause floor mats to jam accelerator pedals. The company later recalled vehicles over defects involving the pedals themselves.

The recalls set off a flurry of lawsuits claiming defects harmed the value of Toyota vehicles or caused accidents leading to death and injury. Toyota settled suits claiming economic loss for about $1.6 billion.

Toyota has won both injury cases that reached jury verdicts since the recalls, including one in New York in 2011 and another in Philadelphia in June. A Los Angeles jury is deliberating in a third trial, involving the death of a 66-year-old woman.

Toyota is facing a fifth trial next month in federal court in Santa Ana, California, where about 200 death and injury cases are pending. Another case is set for trial in February in state court in Michigan.

Many of the death and injury lawsuits, including Bookout’s, claim that loose floor mats and sticky pedals don’t explain all episodes of sudden acceleration and that the electronic throttle control system is at fault. Bookout’s vehicle, a 2005 Camry, wasn’t included in the recalls.

Lawyers suing Toyota claim that reports of unintended acceleration increased after Toyota began to equip vehicles with its ETCS-i system, whereby the engine’s throttle is controlled electronically, not mechanically. Signals are sent from a sensor that detects how far the gas pedal is pressed to a computer module that opens and closes the throttle.

The lawyers claim that outside electronic signals can trigger the throttle and that the brakes can’t stop the surging car. Bookout’s lawyers also claim her vehicle should have had a brake override system to slow her Camry.

Toyota has disputed any flaws in the electronic throttle and denied there were any defects in the Bookout Camry.

The National Highway Traffic Safety Administration ended its probe of Toyota models in February 2011 after NASA, the U.S. space agency, said it found no electronic causes of unintended acceleration during a 10-month review.

A National Academy of Sciences panel said the auto-safety agency was justified in closing its probe, while saying electronic or software causes couldn’t be excluded.

NHTSA saw a 400 percent increase in complaints of sudden acceleration after the electronic throttle system was introduced, Beasley told the jury today.

“NASA will tell you they really couldn’t understand the code because it didn’t follow standards,” Beasley said. The company “built the problem into their computing system.”

Skid marks on the road contradicted Toyota’s claim that Bookout hit the gas pedal instead of the brakes, he said.

“This car left 150 feet of skid marks — that’s half a football field,” Beasley said. “I would hate to be an expert and try and explain how you get skid marks.”

Since the accident, the Bookout Camry “has been inspected by at least a dozen engineers and scientists,” said Bibb, the Toyota lawyer. “They’ve spent literally hours examining and testing the brake system, throttle control and the engine of her car.

‘‘No one has ever found any problem with her Camry that could explain how the car could have accelerated if she pumped the brake pedal, or why she didn’t stop the car at the stop sign at the end of the ramp,” he said.

Claims of sudden acceleration in vehicles from multiple manufacturers were made even before electronic throttle systems were introduced, Bibb said. Studies by NHTSA and the U.S. Department of Transportation showed many of the complaints were probably attributable to driver error, he said.

“The one common thread that all of these vehicles had is they had a driver,” Bibb said.

“Cars have an enormous amount of interaction involving electronics and software,” Brett Smith, co-director of manufacturing, engineering and technology at the Center for Automotive Research in Ann Arbor, Michigan, said in a phone interview.

“It’s very difficult to test and replicate every exact circumstance that may occur,” Smith said. “It’s possible there could be situations in which problems arise, and that are almost nearly impossible to replicate.”

Smith said he’s unaware of any conclusive study finding electronics were a cause of cars suddenly accelerating.

“Multiple independent evaluations have confirmed the safety of Toyota’s electronic throttle control systems, which are equipped with numerous, robust failsafe systems,” Carly Schaffner, a Toyota spokeswoman, said in a statement before trial. “There are no real-world scenarios in which Toyota electronics can cause unintended acceleration and we do not believe a brake override system would have prevented this unfortunate accident.”