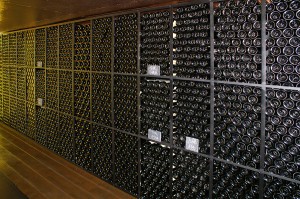 A former California wine keeper convicted of destroying more than 4.5 million bottles in a warehouse fire was sentenced Tuesday to 27 years in prison.

A federal judge in Sacramento also ordered Mark Anderson to pay $70.3 million to customers who lost their premium collections in the October 2005 blaze.

Anderson, 63, stored the wine for 95 vintners and dozens of private collectors for a fee at the Wine Central warehouse in Vallejo. Prosecutors say he set the fire to cover up the fact that he was embezzling wine for years.

Winemakers from Napa and Sonoma counties stored wine inside the warehouse, a former submarine repair facility. It was thought to be fireproof because of its thick concrete walls and floors.

The building did not have sprinklers, meaning the fire spread quickly. It heated the inside of the warehouse to about 2,000 degrees, cooking the wine in its bottles. Anderson, 63, came under immediate suspicion because he was at the facility the day the fire started, and because the blaze originated in his section and was sparked by gasoline-soaked rags.

Anderson, who owned a wine storage business named Sausalito Cellars, had been storing some of his wines at Wines Central but removed most of them after being asked to do so by business managers several months before the fire.

The fire caused $250 million in damage and injured two firefighters.

In 2009, Anderson pleaded guilty to 19 counts, including arson, mail fraud and tax evasion. Sentencing was delayed because of his unsuccessful attempt to withdraw the guilty plea.

“Most of the victim wineries were small family-run businesses that housed their complete inventory at Wines Central because they had no storage capacity of their own,” Sacramento U.S. Attorney Benjamin Wagner said. “This caused a great deal of financial and emotional distress on those small-business owners and their employees. The sentence today properly reflects that suffering.”