A federal judge has ordered settlement talks in a multi-million-dollar dispute over bone castings from three famed tyrannosaurus rex specimens.

Attorneys say the case is the first of its kind involving a copyright fight over dinosaur castings _ fossil replicas often used in museum displays. It pits a South Dakota research company against a Montana nonprofit that allegedly made unauthorized copies of castings from two t-rexes, dubbed Stan and Sue.

The Black Hills Institute of Geological Research claims Fort Peck Paleontology, Inc. of eastern Montana used the castings to fill out incomplete portions of a third tyrannosaurus rex, known as Peck’s Rex, and then profited from sales of replicas.

Through a copyright infringement lawsuit filed in federal court in Montana, Black Hills is seeking $7.4 million in damages – a figure that could be tripled to more than $22 million under federal copyright law, said the South Dakota company’s attorney, Luke Santangelo.

But Antoinette Tease, a Billings attorney representing Fort Peck Paleontology, says her client made “negligible profits” off the castings and offered to return them but was turned down.

U.S. District Judge Sam Haddon in Great Falls last week sent the case to settlement talks at the request of the two parties. The talks will be overseen by U.S. Magistrate Judge Jeremiah Lynch and are expected to convene in January, attorneys said.

Both sides indicated they were hopeful a deal could be reached to resolve the case. Yet they offered sharply different interpretations on whether copyright restrictions were broken and how much damage was done.

“The total number of bones we’re talking about, it’s an absolute minuscule percentage of the entire t-rex skeleton,” Tease said. “They want $22 million for not even the real bones but casts of the bones that are inside the skull.”

Replicas of Peck’s Rex are in museums including the Carnegie Museum of Natural History in Pittsburgh, the Wyoming Dinosaur Center and the Maryland Science Center, according to court documents.

Santangelo said Fort Peck Paleontology had taken actions that were “blatantly wrong” and should be held accountable.

“They’re not going to get a complete free pass,” he said. “They basically just copied Stan. We don’t own a copyright to the t-rex, but we own a copyright to Stan because we created that. They just used it and tried to hide that fact.” 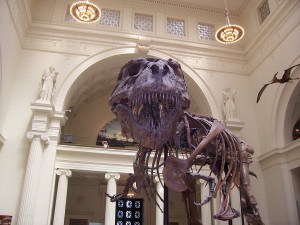 The original Sue is a permanent feature at the Field Museum of Natural History in Chicago, which bought the specimen at auction for almost $8.4 million. The sale came after an ownership dispute in which the federal government took the dinosaur from the Black Hills Institute following its 1990 discovery, saying it had been taken from Indian land held under federal trust.

Tease says that as a result of losing ownership of Sue, Black Hills’ had no right to file for a copyright on the castings it made from the specimen, including some later loaned to Fort Peck Paleontology. As for the other castings in question, from the t-rex Stan, Tease says those were given by Black Hills to a paleontologist who worked with – but not for – Fort Peck Paleontology.

Tease said that the employee who used the casts to mold the head of Peck’s Rex did so at the direction of that outside paleontologist. Subsequent profits off Peck’s Rex totaled “five figures, max,” Tease said, adding that her client remained willing to give up the casts still in its possession.

John Rabenberg, an eastern Montana wheat and barley farmer and chairman of Fort Peck Paleontology, said the organization has been shut down until the lawsuit is resolved.