Hurricane Sally made landfall in U.S. Gulf Coast, where it could inflict as much as $5 billion in damage and losses across Mississippi, Alabama, and the Florida Panhandle from “catastrophic” flooding in the region.

Sally came on land near Gulf Shores, Alabama at 5:45 a.m. New York time Wednesday, according to the National Hurricane Center. The storm had wind speeds of 105 miles (169 kilometers) per hour, making it a Category 2 hurricane on the five-step Saffir-Simpson scale, as it moves toward the coast at 3 mph.

“Historic, life-threatening flash flooding is likely,” Dan Brown, a hurricane center forecaster, wrote in his outlook. “In addition, this rainfall will lead to widespread moderate to major flooding on area rivers.” 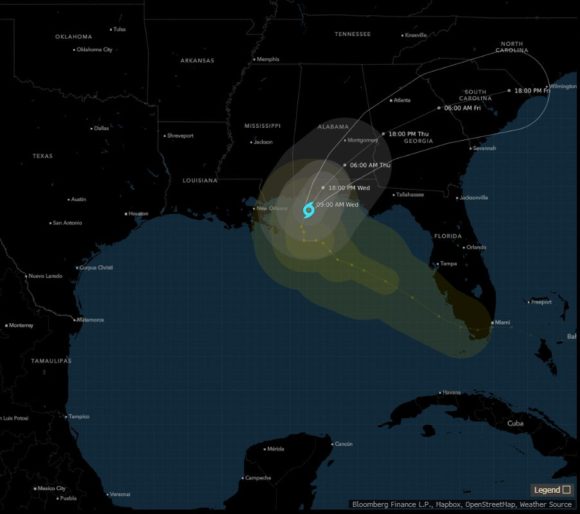 The storm, which has sparked evacuations from some offshore energy platforms, had slowed as it closed in on the Gulf Coast.

The U.S. has been pummeled by natural disasters this year, with wildfires devastating the West, storms causing billions of dollars of damage in the East and along the Gulf Coast, and a derecho ripping through the Midwest earlier this summer. With the emergence of Tropical Storm Vicky, the Atlantic basin has now produced 20 storms, the second most on record. Only 2005 had more storms, with 28.

Winds strengthened rapidly early Wednesday after slowing to 80 mph on Tuesday. A storm surge up to 7 feet (2 meters) is possible along parts of the Gulf Coast. Lesser amounts will occur near the mouth of the Mississippi River.

“Any time the surge goes above three feet it is very problematic,” said Dan Kottlowski, a meteorologist with AccuWeather Inc. Several hundred square miles along the coast could get more than 20 inches of rain, which “classifies as major flooding potential.”

The flooding could lead to widespread damage because after Sally comes ashore, it will drift east through Georgia and South Carolina, wringing out more rain as it does.

“I think the focus will be Mobile and inland Alabama flooding,” said Chuck Watson, a disaster modeler with Enki Research. He estimated damages and losses would range between $3 billion to $5 billion, less if the heaviest rain stays off shore, but costs could rise if there is wind damage.

Disasters and emergencies have been declared along the Gulf Coast by state and local agencies, as well as the federal government.

Across the Gulf, just over 23% of production platforms and 30% of rigs have been evacuated, according to the Bureau of Safety and Environmental Enforcement. Nearly 27% of oil production and more than 28% of gas has been shut in. Phillips 66 said it would shut its Alliance refinery in Louisiana ahead of the storm.

The floods could impact cotton, corn and peanut crops through the region, though widespread damage isn’t expected, said Don Keeney, a meteorologist with Maxar.

Seven storms have hit the U.S. in 2020, including Hurricane Laura, which devastated southwest Louisiana, and Hurricane Isaias, which temporarily knocked out power to millions in the Northeast.

In addition to Sally, a few other storms are churning in the Atlantic. Hurricane Paulette is drifting out to sea after battering Bermuda. The other storms — Teddy and Vicky — won’t be an immediate threat to land. There is a 70% chance a fifth storm could form in the next five days.