When Hurricane Irma rolled across the Florida Keys this fall, it wasn’t just the motels and marinas, Tom Thumbs, stilt houses and shell shacks strung along the island chain that got slammed. 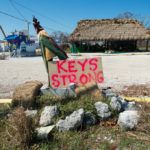 A handwritten sign of encouragement to the Florida Keys community sits on the side of Overseas Highway in Marathon, Florida after Hurricane Irma. Sunday, September 17, 2017. PHOTO BY J.T. BLATTY / FEMA

Underwater, the storm pushed around massive amounts of sand, uncovering ancient reefs and burying some closer to its path. Some channels got filled, others reconfigured. Buoys that marked navigation or provided moorings for boaters got ripped free – some 800 alone in the Florida Keys National Marine Sanctuary will need to be surveyed. Debris, from boats to fence posts to propeller-snagging utility lines, created new underwater hazards.

Navigation, never easy among the mud banks and seagrass flats or maze of islands, took on new challenges.

Now the Sanctuary that stretches from the north end of Biscayne Bay to the Dry Tortugas is teaming up with the boating industry to undertake the daunting task of mapping the changes. Beginning Jan. 19 through February, the Sanctuary is asking boaters to report changes to Navionics, an Italian company that produces navigational charts. Navionics also helped chart changes in the northeast after Superstorm Sandy.

“We cannot get all the information we need by ourselves. So we need to work with partners,” said Florida Keys National Marine Sanctuary Superintendent Sarah Fangman, who oversees a staff of less than three dozen, including a six-man buoy team responsible for about 2,800 square miles.

For mariners, changes after a storm are par for the course, but Irma was a rare Cat 4 storm that made landfall, and the first to hit the Keys with such fury since Donna crossed Marathon with 140 mph winds in 1960. Hurricane-force winds stretched 160 miles. Tropical storm winds reached 440 miles. After Irma crossed Cudjoe Key, before and after satellite photos showed a dramatic bright halo of water clouded with sand all along the coastline, from the Treasure Coast to Cape Coral.

Much of the damage underwater reflected the damage above ground, with the worst impacts near Big Pine in the Lower Keys, and to a lesser degree, Marathon to Key Largo, Fangman said. Areas around Key West and Boca Chica suffered less damage, along with Key Largo to the north.

Damage to marine life, and especially the imperiled reef tract, which has shrunk to half its original size and battled disease and warming waters in recent years, is still being assessed. The sanctuary is working with Everglades National Park, the U.S. Geological Survey, the Florida Fish and Wildlife Conservation Commission and other agencies to determine what damage may be lasting and what parts of the reef can rebound. In October, the Sanctuary teamed up with Mote Marine Lab to ask divers to report damage. They are also keeping a close eye on sponges, which feed by filtering water and got walloped by the prolonged turbidity, Fangman said.

As the seasons change and lower winter tides roll in, changes to the bottom are likely to become more obvious, said Capt. Steven Friedman, commodore of the Florida Keys Fishing Guide Association and a guide in the Upper Keys.

“A lot of it’s sort of navigational aids in Everglades National Park,” he said. “They have markers and posts that are down, in the channels and waterways we navigate.”

Friedman had not heard of an increase in groundings, although tournaments that focus on flats fishing in shallow Florida Bay won’t start in earnest until Spring. Most offshore winter tournaments are still on schedule. Only one, the Key Largo Sailfish Challenge, will “take a rest,” according to a Facebook post, because of Irma. For guides and anglers who often leave before daybreak, markers can be critical.

“Seasoned boaters know what to look for, but even then when it’s not light out, that’s what’s concerning,” he said. “You gotta be able to read the water and be careful in any scenario, especially after a storm.”

Fangman said the buoy team is in the process of surveying markers, but with a team of just six, it has largely focused on the most popular and heavily-trafficked spots.

“We haven’t gotten them all replaced yet, but every chance they get when the weather is good they’re checking,” she said.

It’s not yet clear how bottom changes will be addressed, she said. If debris is blocking a channel, it will likely be removed, she said. But if it’s filled, dredging could be a more complicated fix. Whether to dredge would be decided by the U.S. Coast Guard, which maintains channels.

“Mother nature has a way of moving things around,” she said. “We can try to put them back where we think they go, but Mother Nature has her own way.”