Hospital costs per workers’ compensation claim in North Carolina remained higher than most states in 2012 in the wake of attempts to control their costs, according to a new study by the Workers Compensation Research Institute.

The report, CompScope Medical Benchmarks for North Carolina, 15th Edition, looked at medical costs between 2007 and 2012, a period that includes a 2009 reduction in the state’s hospital fee schedule for outpatient care. It compared results with those of 15 other states.

Overall, North Carolina’s medical payments per claim were typical, but there were differences by provider. Hospital costs per claim were among the highest of states WCRI studied. Non-hospital costs, on the other hand, were slightly lower than the typical state, driven by lower prices paid. 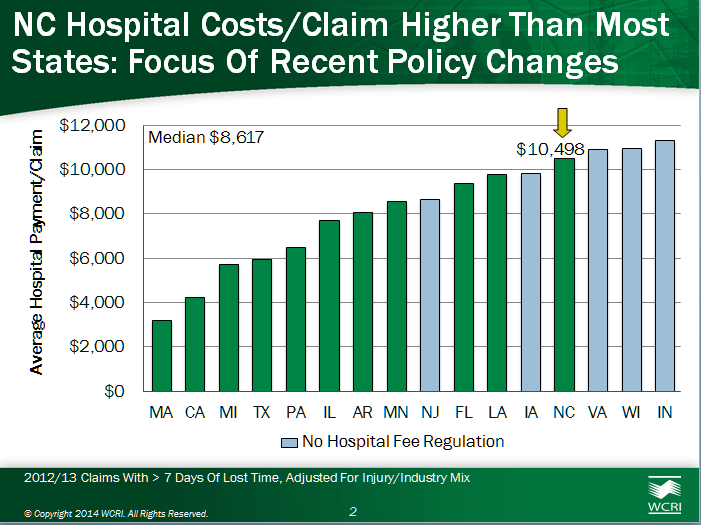 The state tackled the issue of hospital costs in 2009 by reducing the hospital outpatient reimbursement rate. For most hospitals, the reimbursement rate fell to 79 percent of charges, down from 95 percent. Other WCRI research cited in the CompScope report indicates states with no fee schedule or, like North Carolina, with a charge-based schedule, had higher hospital outpatient costs per surgical episode than states with fixed fee schedules.

The state enacted more changes in 2013, freezing charges for inpatient and outpatient services, then cutting rates between 10 percent and 15 percent. Further, legislation passed in 2013 required hospital reimbursement to be based on methodologies used by Medicare, but no changes have been enacted yet.

WCRI’s study takes place mainly before the 2013 changes to hospital reimbursement could have had any effect. Researchers stated they observed an increase in prices paid for office visits and physical medicine services in 2013, following fee schedule changes which took effect January 1, 2013.

For more information about this study or to purchase a copy, visit http://www.wcrinet.org/result/csmed15_NC_result.html.