But unlike the Golden Isles, Fernandina Beach spends more than $200,000 a year on safety measures at its beaches and has 35 seasonal lifeguards spread along 12 miles of shoreline. It also has all-terrain vehicles, powered personal watercrafts and a truck. 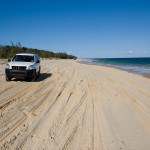 Glynn County spends $60,000 a year for eight seasonal lifeguards along about a mile of beach and relies on kayaks and one all-terrain vehicle for rescues.

For Fernandina Beach, it is more than an investment in safety. It is also a marketing pitch: Visit us, our beaches are safe.

After two drownings this past year at the St. Simons Island beach – one at an unguarded time, the other at an unguarded location – the Glynn County Commission has begun looking at ways to improve safety for waders and swimmers at a beach known for dramatic tide changes and rip currents.

Some commissioners, though, say a staff recommendation to budget another $150,000 this year for nine more lifeguards and one-time purchases of all-terrain vehicles and personal watercrafts for rescues is more than they want to spend.

At Fernandina Beach, where there are typically 300 rescues each summer and an average of less than one drowning a year, Fire Chief Jason Higginbotham says the effort put into beach safety has become a marketable asset.

“I’ve learned that hotels will offer that they are near a life-guarded beach. It puts them in another bracket,” Higginbotham said. “It helps promote and protect the citizens, as well as tourists that come into town.”

While even commissioners who question an additional expense acknowledge that what Glynn County has may not be enough, other community leaders say a lot more needs to be done.

“I consider what we have today as the bare minimum, if that,” said Scott McQuade, executive director of the Golden Isles Convention and Visitors Bureau, which has the chief responsibility of boosting tourism. “Our competition has rather robust beach safety systems. It’s important to our visitors and our families, and we should take it seriously.”

McQuade says he appreciates that the commission is discussing beach safety, but suggests that it compare the safety measures on St. Simons Island with those at nearby beaches.

The Golden Isles seeks to be a destination, and tourism is its No. 1 industry, he says, and certain service standards should be expected: Would a visitor to the area instead of competitors like Hilton Head Island, S.C., or Fernandina Beach have the same level of beach safety here? he asks.

Catina Tindall, chair of the board of Brunswick-Golden Isles Chamber of Commerce, agrees with McQuade. She wasn’t happy to hear that county commissioners had asked county staff members to come up with a reduced safety plan.

“We invite people to our community and promise them a good time. We should be able to promise that we’ll keep them as safe as possible,” she said.

“Imagine it was you or someone you cared about deeply out on that sandbar or hurt … child, grandchild, family member … would you prefer a kayak or a motorized vehicle (to reach them)? When it’s someone you love on the line, and it’s just a few thousand dollars more, at the end of the day we have a great responsibility.”

Tindall pointed to a woman’s death from a heart attack at the beach a few years ago that might have been prevented had a proper vehicle been able to move her off the beach. (Jekyll Island is a state park that is outside Glynn County jurisdiction. It has a beach patrol, but no lifeguard stations.)

The budget increase before commissioners also faced officials at the city of Tybee Island, north of Savannah, a few years ago, when they decided to revamp their beach safety program.

Fire Chief Skip Sasser says he didn’t mind taking on the additional work, but he made a point to request more funding.

When the fire department took over the beaches, Sasser said he grew the budget from a $110,000 annual expenditure to nearly $400,000 a year. Of course, Tybee Island, unlike St. Simons Island, charges to park near the beach, and has many more people on its beach at a given time.

“At the time (before the fire department took over), basically they just had personnel along the beach, and it wasn’t that much personnel,” Sasser said.

“When we took it over, we basically set it up where our (all-terrain vehicles) would be bigger, so we could carry equipment on them. We’ve got them set up like mini-ambulances. We’re not only dealing with water-related incidents, we’re dealing with heat exhaustion, heart attacks, strokes.”

Tybee Island has 10 lifeguard towers (St. Simons has four), Sasser said, each staffed with two lifeguards. Sasser says his first priority is the safety of the staff, so guards work in pairs to allow for more breaks and team responses.

He attributes increased staff and equipment during the past year to saving at least four lives. Emergencies in unguarded areas were reached more quickly with all-terrain vehicles, and medical equipment on them meant faster and better responses.

But the improvements did not occur overnight.

“I understand budgets and dealing with restraints. Sometimes you can’t jump in at 110 percent, so you add more next year,” Sasser said.

City Manager Schleicher says investing in public education was an important step in Tybee Island’s beach safety improvements. Not only were issues with tides and currents a problem for visitors, but ocean creatures, especially jellyfish, were causing problems.

Tybee Island adopted a flag warning system, and worked with the local media to inform the public of what it meant. Improving safety, though, is an ongoing process, she said.

“There have been a number of instances where lives have been saved,” said Tybee Island Mayor Jason Buelterman. “In terms of the money, is it justified? Absolutely, and I think it’s money very, very well spent.

“We’ve increased pay so we can attract better-quality lifeguards. We’re always being asked by the fire department to add more money to the budget to cover more areas. That’s what we think we should focus on.

“It’s a never-ending process, it’s never going to be perfect. But I think the money you spend is very worthwhile.”