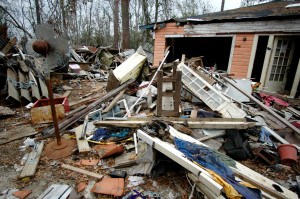 Members of the Waveland Police Department survived Hurricane Katrina by grabbing a tree in front of their building and hanging on for their lives when a wall of water washed away most of the town on Aug. 29, 2005.

Six years later, Waveland is swamped again, but this time in debt. And the police force, like the rest of the city’s departments, is fighting to stay afloat.

City Attorney Gary Yarbrough said Waveland is facing a $900,000 deficit for the fiscal year. It’s a crushing amount for a town of a few thousand people trying to recover from one of the worst natural disasters in U.S. history.

The tax base has never recovered from the storm. Stores and restaurants are back in business along Highway 90, the main artery through town, but recovery has been slower in other areas.

Streets near some of the most valuable beach property resemble ghost towns. Government agencies are still operating out of temporary offices. And heavy equipment is as common as cars on the city’s beachfront road, which is still being repaired.

The economic recession and the fallout of the Gulf oil spill compounded Waveland’s budget crisis, so much so that many people don’t know which is to blame more.

“It’s probably to some extent a mixture of the three,” Yarbrough said.

Whatever the case, the consequences are easy to see.

Jimmy Varnell, the police chief who guided the department though Katrina, was fired Aug. 15 and escorted out of his office. Some of his officers have been let go, too. Those who remain face pay cuts and demotions, as do other city employees.

“I have no idea why I was fired. They say it was for not maintaining a budget and for not having the police officers write enough tickets to maintain a budget,” Varnell said recently. “It was an unworkable budget. We haven’t had a capital outlay since Katrina.”

Varnell’s firing angered many people in Waveland, but Mayor David Garcia created an even bigger stir when he proposed disbanding the police department entirely and letting the sheriff take over law enforcement.

Residents turned out by the dozens to city meetings, which became a spectacle themselves, complete with outbursts and shouting. One man was kicked out of a board meeting after accusing city leaders of “communism” for not recognizing people to speak.

In the end, the department was spared, but the economic woes remain.

The Associated Press left messages this week for the mayor, the new police chief and the city’s aldermen. They did not respond.

Residents like Janis Vezzoso, a 66-year-old retired accountant who lost everything in Katrina, are confident Waveland will be back. They see progress every day.

“It’s disappointing to see the town struggle,” Vezzoso said. “But the level of destruction from Katrina, the level of debris – city hall was gone – there was a time when I really didn’t think Waveland would be able to come back at all.”

Vezzoso said she and her husband started rebuilding on their same lot in Waveland less than a year after Katrina. Four of the six houses on her street have been rebuilt, she said.

But construction is spotty in some areas. Insurance rates soared after Katrina. New flood maps required some property owners to raise the elevation of their homes to rebuild, another added cost that some residents simply can’t afford. And some of the city’s most valuable property was owned by part-time residents who haven’t rebuilt their beach retreats.

“Some people would have to pay more for insurance than their mortgage payments,” Yarbrough said. “A lot of those people haven’t built back.”

Vezzoso said people should be patient.

“I don’t’ know why people think all these miracles are going to happen and all of a sudden everything is going to be good,” she said. “People have to be patient. Waveland will recover, it’s just going to take time.”