The gym of a rural Texas elementary school was fully engulfed in flames before anyone could do anything about it.

The Lubbock Avalanche-Journal reports with only unpaid volunteer firefighters in the small town of about 2,200 people, Hale Center Volunteer Fire Department Chief Mike Watson said at least once or twice a year the department responds to fires that completely overwhelm their resources.

“We’ve lost some structures because we either didn’t have enough personnel right at the critical time that we needed them or not the right kind of equipment or maybe we were having trouble getting enough water on the fire early on,” said Watson, who also works full time as a captain at the Plainview Fire Department. “The more time the fire has to get going, the bigger they get, so the more out of control they could be.”

The school’s gym, which caught fire in the middle of the night about two years ago in Hale Center, was one of those losses.

In towns like Hale Center, the lack of a paid, around-the-clock fire department makes responding to emergency situations difficult as dispatchers scramble to reach as many volunteer firefighters and nearby fire departments as possible.

Statewide, about 75 percent of fire departments in Texas are managed entirely by volunteers, according to data provided to A-J Media by the Texas A&M Forest Service, which provides training and some resources, such as grants, to volunteer fire departments.

Texas’ 28,450 volunteer firefighters only slightly outnumber the state’s 26,931 paid firefighters, who are mostly in larger cities.

In the South Plains, all of the rural towns with fire departments in Gaines, Garza, Crosby, Lynn and Yoakum counties are operated by volunteers.

“Funding is the big thing. Could a county government afford to put on an all-paid fire service? That’s the challenge, the financial challenge,” said Jason Keiningham, department head at the Texas A&M Forest Service. “But the need is still there to have folks to protect life and property, so I think that’s historically why the volunteers have been in place because somebody needed to answer the call.”

A rack of yellow firefighter jumpsuits line the wall at the volunteer fire department in Spur. They’re hand-me-downs from Lubbock Fire Rescue.

Still, Spur Fire Chief Reid Arnold showed a hint of pride as he described their equipment and firetruck, a retired U.S. Army vehicle that was painted red. Two of the department’s other tanker and rescue trucks came from forest service grants.

While the city and county provide some funding, the fire department has a tight budget.

“They rely a lot on fundraisers, like your pancake suppers and your barbecue events,” he said. “These are the ways they raise money to have the fuel to put in their trucks, to fix those trucks, to have the lights on in the station, the water to fill the trucks, to keep the trucks clean, to purchase the rescue tools they need.”

Although there are grants available for rural departments to receive funds for training and equipment, Smyer Volunteer Fire Department Chief Chris Bradberry said small, volunteer-only departments don’t have the manpower or expertise to write lengthy grant proposals so, for the most part, he quit applying for grants.

“It’s a complicated process and, in my opinion, developed more for the big cities who have paid guys who sit down and do all that,” he said. “Until they make their funding easier to get this equipment, it’s just hard.”

Lack of resources has even caused some fire departments across the state to close.

“I’ll use Cotton Center, for instance,” Watson said. They used to have a fire department, but they got to where they didn’t have enough people responding and state laws were enacted that basically made it next to impossible for smaller communities to be able to fulfill the obligations that the state put on the fire departments.”

The volunteer fire department in Hale Center as well as the Abernathy department began helping out with fires in Cotton Center, he said.

“It’s basically divided up between the other existing fire departments,” Watson said.

When flames erupt in a city, paid firefighters hurry from their fire station to tackle the blaze. 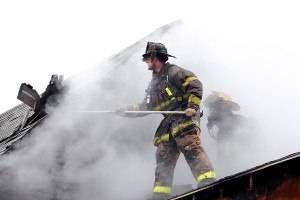 But volunteer firefighters face an extra step of heading to the station and gearing up before arriving at the scene of a fire.

First, they have to stop whatever else they’re doing, which in working hours could mean anything from harvesting cotton to meeting with clients. On weekends, they might have to sacrifice a family outing or ball game.

“It used to be a lot stronger, and (it) used to be you’d have a fire truck and there would be not enough space for firefighters who wanted to respond,” he said. “But now it’s not so much that case because the demands of our day-to-day life and family life. It’s harder for people to volunteer.”

Even departments with more volunteers on call are faced with the difficulty of getting to a scene as quickly as an around-the-clock paid department.

Bradberry said response time isn’t an issue in the sense that dispatch is quick and able to contact a handful of his department’s volunteers. Instead, he said, distance becomes an issue.

“I’ve been doing this 20-something years and I cannot recall losing a structure because of time response,” he said. “It’s always been because of the distance. When you have to drive 5 miles to the structure and by the time you get the call, everybody gets to the station and you get a truck going, you’re talking 15 minutes or so before you can even be on scene.”

Watson said his 17-member volunteer department in Hale Center receives about 10 calls weekly and covers about 356 square miles surrounding Hale Center, up to the border of Plainview and down toward Abernathy.

Rushing from one end of the county to another can take more than an hour.

That’s why it’s not unusual for neighboring fire departments to form mutual agreements. If a fire breaks in the tiny Dickens County community of McAdoo and no McAdoo firefighters are available, those in Spur or Dickens will likely put out the flames.

Calls arrive at the Dickens County Sheriff’s Office, whose dispatchers relay the message. Arnold and his fellow volunteers then receive a text; they find that smartphone service more convenient than carrying a radio everywhere.

In addition to small towns, there are even a few all-volunteer fire departments in midsize cities, said Shawn Snider, the Texas Association of Fire Chiefs spokesman who also serves as fire chief in Edinburg.

An example is Pasadena, a Houston suburb of 150,000 whose fire department consists of more than 200 firefighters, all unpaid.

In comparison, Brownfield and Lamesa are less than a tenth that size, but have fire departments with a combination of paid staff and volunteers.

Many paid fire departments started as volunteer, Snider said. In a typical scenario, a town’s population expands, increasing its demand for fire services.

Training requirements are fairly similar for paid and volunteer firefighters. A main difference, Snider said, is paid firefighters must be certified under the Texas Commission on Fire Protection, while volunteers have the option of earning their certification under the State Firefighters’ & Fire Marshals’ Association.

“As their cities get bigger, they find a need for daytime staffing,” he said. “Usually what drives that need is the size of the city and the ability of the volunteers to take care of the needs of that city.”

“It’s very important for everybody to have a working smoke detector and an escape plan,” he said. “The type of fires that are occurring in homes today, if you’re waiting for the fire department to get you out, it’s a death trap.”

And, regardless of the challenges small departments face versus larger ones, Watson said fire departments of any kind are a vital part of keeping a community safe.

“We both put our lives on the line the same,” Watson said, “whether we’re paid or not.”