A pair of bills filed in the Texas Legislature would prohibit automobile insurers from issuing “named driver” policies in the state, but one would allow named driver exclusion under certain circumstances. 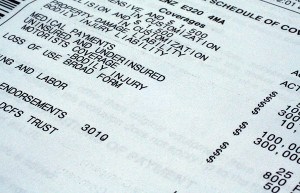 While both measures would prohibit the issuance of named driver policies, HB 335 would permit a “named driver exclusion” on a policy “if the exclusion specifically names each excluded driver and does not exclude a class of drivers.”

If passed, the bills would apply to all automobile insurance companies in Texas and would affect policies written or renewed on or after Jan. 1, 2016.

A similar bill, HB 1773, was introduced but did not pass in the 2013 regular session of the Legislature.
Disclosure Rules

While the Legislature in 2013 allowed the use of named driver policies it passed legislation requiring that consumers be informed of the limitations inherent in such policies.

Senate Bill 1567, passed in the 2013 Legislature, Regular Session created §1952.0545 of the insurance code, which requires insurers and agents to provide consumers with “written and oral disclosures, and contemporaneous written confirmation of the oral disclosure, for named driver policies,” according to the Texas Department of Insurance.

In May 2014, Insurance Commissioner Julie Rathgeber adopted amendments that require the named driver disclosure to be included on auto ID cards.

More recently, the commissioner adopted rules that add §5.208, which seeks to clarify the disclosure responsibilities of insurers and agents regarding the issuance of named driver policies, both new and renewals.

The disclosure section of the newly adopted rules is as follows:

(A) made the oral disclosure under paragraph (3) of this subsection;

(B) received a contemporaneous written confirmation of the oral

disclosure under paragraph (4) of this subsection;

(C) made the written disclosures under paragraph (5) of this subsection;

(D) received a signed copy of the written disclosure under paragraph

(2) Content. Oral and written disclosures for named driver policies must include

the following, “WARNING: A NAMED DRIVER POLICY DOES NOT PROVIDE

COVERAGE FOR INDIVIDUALS RESIDING IN THE INSURED’S HOUSEHOLD THAT

requirement by delivering the disclosure live or using a recording:

(A) in the presence of the applicant or insured;

(B) over the telephone; or

(C) over the Internet (for example, by Internet video call).

(5) Written disclosures must be conspicuous, as that term is defined in Business and Commerce Code §1.201(B)(10). An agent or insurer must:

document issued to the insured, including an auto ID card issued under §5.204 of this title; and

(B) require an applicant or insured to sign a copy of the disclosure.

(6) Signatures. All signatures required by this section must be original or electronic signatures executed specifically for each new and renewal policy.

(A) Electronic signatures must comply with Business and Commerce

(Electronic Transactions), and any applicable rules.

(B) Signatures must not be:

(i) made before the agent or insurer makes the disclosure;

from a signature on file with the agent or insurer; or

(C) An agent or insurer may not state, require, agree, or assume that a signature requirement is met based on payment received from the applicant or insured.

(7) Language. Agents and insurers must provide the disclosures in English and, in addition, may provide them in other languages.

(d) Installment payments. After complying with the disclosure requirements for each new and renewal policy, an agent or an insurer is not required to comply with subsection (c) of this section each time the agent or insurer accepts an installment payment during that policy’s term.