After the devastating tornado that hit Faulkner County on April 27, Vilonia, Ark., residents are tiptoeing into the rebuilding process.

While the rebuilding of a nearly $13 million school for the Vilonia School District is moving forward, a group of citizens is hoping business owners will wait and consider all options before construction starts on the city’s Main Street, Arkansas Business reported.

Stanley Gordon Jr., owner of Gordon Financial Services of Vilonia, said he and another Vilonia resident, Marty Knight, have formed a grassroots committee to discuss the future of the city. He said about 65 people have volunteered to be on one of the three subcommittees that involve property owners, planning and looking for grants or public money for beautification projects on Main Street, which was wiped out by the April tornado that also killed 15 Arkansans. 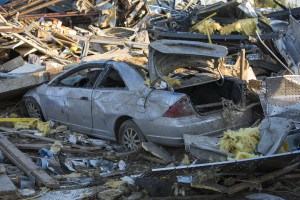 Sue Shock, owner of Sue Shock Insurance of Vilonia, said her renovated 1,100-square-foot home that she used for her business was destroyed by the tornado.

“There’s certainly not a place in Vilonia to put a business, because it’s pretty much wiped out,” said Shock, who is the sister of Stanley Gordon.

She said she considered renovating another one of her buildings or rebuilding. But when she heard about the citizens group to develop plans for Vilonia, she decided to delay her decision.

“So many of us are putting things on hold right now,” said Shock.

She said business owners are talking with architects and other committee members “to do things in a fashion where we won’t look back later and say, `Man, we had a clean slate, and why didn’t we do it this way or that way?”’

In the meantime, she is operating her business, which sells various lines of insurance, out of her residence.

Vilonia Mayor James Firestone said 22 businesses were destroyed by the tornado, while 15 received major damage and about 20 with minor damage have continued to operate.

Firestone said the city of Vilonia, which has about 4,000 residents, has waived all fees for building permits for those businesses that are rebuilding. “We’re doing our best to expedite everything for them,” he said.

Construction on the 95,000-square-foot Vilonia Intermediate School started in 2013, and the school was scheduled to open for students this month.

“Everything was coming to a good end, and then the storm hit,” said Lance Wright, project manager for Nabholz Construction Services of Conway. The building was about 90 percent completed when the April tornado ripped the structure apart.

Wright said after the shock of the tornado wore off, the focus turned to cleaning up the nails, lumber and sheet metal that were scattered across the construction site. The concrete slabs for the building, though, weren’t damaged and could be used for the rebuilding, Wright said.

Since the building wasn’t finished, the structure was covered under Nabholz’s insurance policy, which will pay to rebuild the school.

Eunice Muhammad, project engineer for Nabholz, said the school will feature 64,000-square-foot of classroom and administration offices and the rest of the space will be for two gymnasiums, a cafeteria with a kitchen and a band room.

Getting the material to rebuild the school hasn’t been a problem, Wright said. “For the most part, we’re going in with the same equipment and building material that we used the first go-round,” he said.

The second time building the school will be faster, Wright said.

The construction workers won’t have to wait seven days for the cement to dry before working on sections of the school, as they did the first time, he said. “We are fortunate this time that all the slabs are in place,” he said.

The original plans didn’t call for the school to have a storm shelter, but that is being considered, Wright said.

Muhammad said the school is ahead of schedule from where it was last year and the project should be completed a month earlier than the first time it was built.

The school is now expected to see its first students in the fall of 2015.

Gordon, of the grassroots committee, said the other Vilonia resident, Knight, came to his office around the first of July and inquired about the status of rebuilding the city.

Gordon, 52, who has lived in Vilonia for more than 40 years, said he didn’t know what the plans were.

They both were concerned that others might be waiting for someone else to make a move, Gordon said. They were afraid that “we may let some opportunities slip by” if they didn’t act, Gordon said.

So they decided to form the committee. “It’s not about us,” Gordon said. “We’re just facilitators.”

He said the success of the project will rest with the property owners, who will have to financially support any plan the committee recommends.

The first order of business for the committee, Gordon said, is deciding what the property owners want.

Gordon said he hopes that when the rebuilding is done, people will be impressed and say, “Have you seen the new Vilonia?”