Louisiana city officials want to make it more difficult for residents to own pit bulls in a crackdown following a near-fatal attack last month.

The Times-Picayune reports officials are working on amendments to Westwego’s pit bull ordinance, proposing that dog owners be at least 21 years old and have at least $100,000 in liability insurance under their homeowner or rental policies.

Officials called for more restrictions after Linda Henry, 54, was attacked by three of her four pit bulls at her home on March 14. She lost an eye and an ear, and the back of her scalp was torn off during the attack. The dogs chewed her arms so badly that doctors had to amputate them, officials said.

Police shot all four dogs as they rescued Henry. She remains hospitalized.

The incident led City Councilman Glenn Green to seek to toughen Westwego’s pit bull ordinance, which was enacted in 2000 after a 2-year-old boy was killed by his family’s pit bull in their backyard. 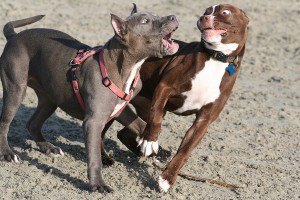 Under the proposal, owners must have microchips implanted in the animals to track them if they escape. Breeding pit bulls will be banned, and the dogs must be spayed or neutered, Shaddinger said. If not confined to backyards, the dogs must be muzzled and must be walked on leashes no longer than 4 feet, he said.

Licensing fees haven’t been set, but the punishment for violating the ordinance could include up to six months in jail and a fine of up to $500, Shaddinger said.

The City Council is still some months away from taking final action on the proposal.