In a heavily guarded store just southwest of Houston, twin .50-caliber “Ma Deuce” machine guns rise up side by side from a mount that could be bolted to the deck of a warship or truck bed.

The guns can fire about 1,200 rounds a minute and take down a plane.

They are among an arsenal of “restricted” or Class 3 weapons, all legal and for sale at Houston Armory, a company that caters to the elite of the gun world and specializes in machine guns, silencers and other weapons required to be registered with the U.S. government.

A few feet away is a fully operational M-60 machine gun, similar to the one carried by “Rambo” through the jungle. There also is a pristine-condition Tommy gun modeled like those used in the Al Capone days. 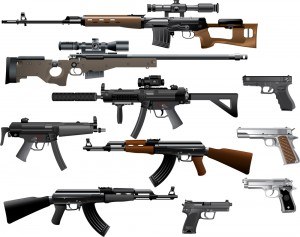 About 28,690 machine guns are legally owned and registered in Texas, according to the Bureau of Alcohol, Tobacco, Firearms and Explosives. That includes thousands of such guns believed to be in Harris County and the surrounding area and owned by private citizens, as well as corporations and police departments.

The weapons are cherished by enthusiasts, collectors and investors who can own them and use them if they are willing to wait and pay. A fully automatic 12-gauge shotgun goes for $150,000 – the price of a house or high-end sports car.

What would a wealthy, law-abiding person do with a pair of machine guns worthy of a frigate?

“It is a trophy, a piece of artwork. Why do you want a Mona Lisa?” said Cris Parsons, general manager of Houston Armory. “People get off on having things others don’t have. Odds are that the CEO of a major corporation will buy this,” said Parsons, who has fired the guns and can imagine them perched as a centerpiece at a hunting lodge.

Despite the discomfort some might have over private citizens owning guns that were made for soldiers, law enforcement authorities say they can’t point to a specific instance in which a legally registered machine gun was used by a private citizen to commit a violent crime.

The weapons used in Connecticut, at Sandy Hook Elementary School, and in Colorado, at an Aurora movie theater, for example, were lesser weapons, semiautomatics that are quickly and more easily purchased at sporting-goods stores, whereas obtaining a license for a machine gun takes six months.

Larry Karson, an assistant professor of criminal justice at the University of Houston-Downtown and a retired federal agent, said regulations and culture surrounding fully automatic weapons are an example of successful gun control, with respect to safety.

“You haven’t had any violations of consequence to make it a front-page story to change the law,” he said, adding that the government can confirm the whereabouts and ownership of machine guns through a home visit, if needed.

“A gun dealer who handles these types of weapons is as concerned about the safety of a community as any law-enforcement officer,” he said.

The number of such guns was limited after President Ronald Reagan signed a law stipulating no more new machine guns, starting in 1986, could be produced for civilian ownership. The move was born from a 1934 law that first required machine guns be registered with the government and established a $200 tax. The restriction was meant to rein in Tommy guns from the gangster days.

The tax was a purposely stifling amount back in the day, but remains the same even now, although if it were adjusted for inflation, it would equate to $3,436, today, according to the Department of Labor.

Every year, there are slightly fewer guns circulating, so their price climbs and with time, more collectors seek them. The price of an M-16 before 1986 cost about $800, and now goes for about $20,000.

ATF spokeswoman Ginger Colbrun said the agency keeps track of machine-gun owners, but the exact number of civilians in the Houston region who own them was not readily available.

“There are lots of opinions out there on firearms. We are not here to weigh in on any of them,” Colbrun said, “just to enforce the laws on the books.”

Requirements are about the same as buying a regular gun. Owners generally cannot be felons, must be a U.S. citizen or legally residing in the United States and must promise to keep the gun properly secured.

They also have to provide to authorities the exact address of the guns’ owner and be amenable to in-person visits by inspectors. The six-month waiting period is also seen as a possible deterrent to criminals.

A Department of Justice-issued application states that the “chief law enforcement officer” in the community where an individual gun owner lives must sign a form to confirm he or she has been advised the gun will be in their area and that they have no objection.

Authorities have witnessed the wrath of machine guns in the wrong hands. In an especially infamous 1997 attempt to rob a bank in North Hollywood, Calif., two men in full body armor sprayed bullets at police while using illegal machine guns.

In 2005, five machine guns were stolen from an unlocked vehicle belonging to a gun dealer in The Woodlands who had been at the shooting range and left them when he parked in front of his home. They were later found.

Houston Armory founder Bill Pace said he and other dealers were outraged by the carelessness.

So much firepower in one specialty weapons shop might entice criminals, but the weapons are kept in vaults within a large bank-style vault, protected by security cameras and alarms. Pace’s employees are armed and trained, and the police say they can respond to any alarm from the business in less than a minute.

“Any sane person would not try it,” he said of potential attackers.

He added, “We observe everyone, and if we don’t feel comfortable with the transaction, we won’t do business with them.