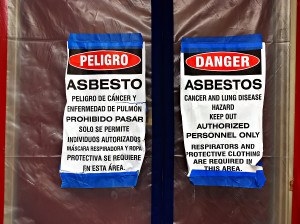 An experimental asbestos demolition method used to tear down a Fort Worth apartment building four years ago may have exposed workers and the public to carcinogenic fibers, the Environmental Protection Agency said.

The EPA’s inspector general said dust from the demolition of the Oak Hollow apartments in Fort Worth “demonstrated asbestos fiber releases.” The building was razed using a process in which it was hosed down prior to demolition and knocked down without the asbestos being removed.

A building on the former Army base at Fort Chaffee, Ark., was demolished in the same manner, the inspector general said.

Unprotected workers adjacent to the restricted areas and members of the public in the vicinity of the sites may have been exposed and should be notified by the EPA, according to the two-page “early warning report,” released on Dec. 14 and first reported Sunday by the Fort Worth Star-Telegram.

Fort Worth is believed to be the first urban area to test the “wet” demolition method, in which walls and ceilings are soaked to try to keep asbestos fibers from being released, the Star-Telegram said.

Demolition work on the apartment building began in the early morning as pedestrians walked to school, according to the newspaper.

Michael Gange, the city’s assistant director for environmental management, told the newspaper that a pending study will give far greater detail and data on the demolition technique. He said he was at the apartment site when it was demolished and saw no emissions.