A sharp decline in claim frequency helped the commercial auto line achieve its best underwriting performance in a decade last year, but rising claim severity threatens to erode profits as traffic returns to US roadways, according to a report released by Fitch ratings this week.

The improvement was driven by year-after-year rate increases and a 25.6% decrease in claims frequency in 2020, the report says. Fitch said the reduction was driven by the sharp decline in driving activity because of the COVID-19 pandemic.

“Claims volume is positioned to rebound in 2021 as driving activity and economic activity continue to increase since late 2020, though current-year performance will still likely benefit from a gradual return to past frequency patterns,” the report says. 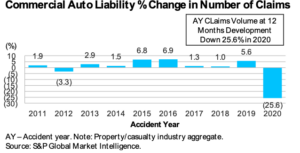 Claim severity is another matter. Fitch said the average paid loss per closed claim jumped 13.4% in 2020, the largest annual uptick in a series of hikes that resulted in a cumulative 49% increase in claim severity since 2011.

Fitch said loss costs tend to trend higher over time because of general inflation alone. Increased use of technology by commercial trucking fleets added to that pressure by making repairs and replacement more expensive.

Insurers may not be prepared. Fitch said carriers incurred losses developed unfavorably for each accident year from 2010 to 2019. Fitch said it believes 2019 reserves are still deficient, but the conservative approach taken by actuaries may not have recognized the sharp drop in claims frequency in 202, meaning the 2020 loss ratio is likely overstated.

“Longer term, a return to an adequate reserve position in commercial auto will hinge on insurers maintaining a conservative approach to reporting losses and the ability to recognize shifts in claims trends,” the report said. 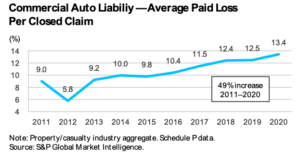 “Advances in data analytics and predictive modeling give commercial auto insurers tremendous opportunities in claims,” Fitch said. “Scoring models provide a tool to quickly identify incidents that correspond with large losses or have a strong propensity for litigation. More sophisticated analytics and artificial intelligence provide tools for the identification and prevention of fraudulent claims.”

Clearly, some carriers have been able to control costs better than others. The report says Progressive Corp. — the nation’s largest commercial auto carrier with a 13.1% market share — posted combined loss ratios that averaged 86% over the past three years. Among the top 15 carriers, only Chubb Limited, Erie Insurance and Tokio Marine US also posted combined loss ratios at or below the break-even point of 100%, the report says.

A summary of the report is available on the Fitch Ratings website.