Over the last five years, as it’s become clear that self-driving cars will take longer than expected to arrive on most American streets, some of the biggest players in the industry have turned their attention to long-haul trucking.

Alphabet Inc.’s autonomous vehicle unit Waymo, the leader in robo-taxis, launched its trucking division Via in 2017 after a handful of start-ups, including Otto, Starsky Robotics, and TuSimple Holdings Inc., had entered the field. Aurora Innovation Inc., one of Waymo’s most formidable competitors, recently decided to focus its efforts on bringing a trucking product to market before branching into ride-hailing. The logic behind the pivot is twofold: highways are easier to navigate than city streets and cargo is less demanding than human passengers.

If a robo-truck drives extra cautiously on its way to a big box store, as Aurora co-founder and CEO Chris Urmson put it when I spoke to him earlier this year, “the roll of toilet paper doesn’t care.”

There are also advantages on the business side. In ride hailing, robo-taxis need to outperform and undercut a large, flexible and relatively cheap pool of gig workers. Truck drivers, on the other hand, are in short supply, a problem that only promises to get worse as e-commerce continues to boom. In one possible version of the autonomous future — a model known as “depot-to-depot”—robot drivers would cover the long and relatively simple stretches of interstate driving and leave the trickier surface streets to human drivers who would take over at highway off ramps. The robots could operate for hours on end without running afoul of service time rules and needing to stop only for fuel, while truckers would still have jobs and could sleep in their own beds at night. TuSimple CEO Cheng Lu estimates that driverless trucks running more hours on the road can reduce hauling costs by 50% 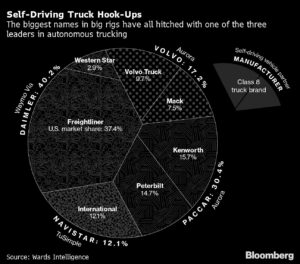 In theory, it’s a win-win, and a multibillion dollar business opportunity. The blank-check companies, naturally, have taken notice: special purpose acquisition company (SPAC) Hennessy Capital Investment Corp. V is reportedly in talks to merge with self-driving truck startup Plus. Yet there are signs that self-driving trucks are already following robo-taxis into the ” trough of disillusionment.”

After a splashy demo covering ten miles on a Florida turnpike in 2019, Starsky Robotics folded last year. In December, the autonomous delivery start-up Nuro acquired trucking start-up Ike, leaving its plans for that market uncertain. For all the advantages that trucking offers, it also comes with unique challenges. “Because of the heavier weight of the vehicle and the high speeds, if something goes wrong, it’s catastrophic,” says Bruno Bowden, a former engineering manager for simulation at Aurora who is now an angel investor, “You don’t get a small accident with a big rig truck.” To avoid these catastrophes, self-driving trucks need to see farther ahead than cars do. “The heart of the problem for driving is predicting about five seconds into the future,” says Bowden. But with trucks, he says, that magic number doubles.

It’s likely that safety drivers will remain in cabs for years to come as companies hone their sensor technology and train their software for every highway scenario. It’s expensive and painstaking work that can overwhelm even the best-run start-ups. The consensus within the industry is that three contestants stand the best chance to make it to the finish line: “It’s TuSimple, Aurora and Waymo,” says Grayson Brulte, co-founder of Brulte & Co., a consulting firm focused on transportation. TuSimple, a San Diego based-company that raised $1.35 billion in an initial public offering in April, is in the pole position, as Brulte sees it, because of its singular focus on trucking and its partnership, begun three years ago, with Navistar International to build autonomous trucks. “They’ve got the head start on it,” says Brulte.

Since that deal, Waymo and Aurora have each struck their own (non-exclusive) agreements with truck makers, leaving the four dominant manufacturers in the U.S. market—Daimler Trucks, Volvo Group, Paccar Inc., and Navistar—tied to one of the three leaders in autonomous trucking. (See chart above.) If robots are to replace truckers on U.S. highways, these are the companies likeliest to be in the driver’s seat: 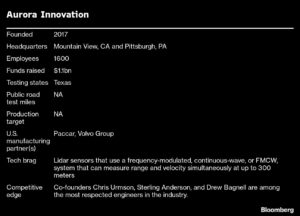 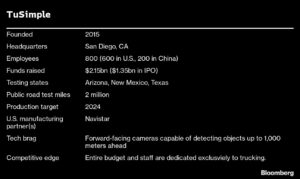 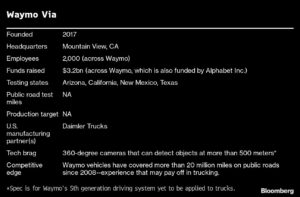