Although I am a native Texan, I grew up in Wisconsin. Therefore, I am no stranger to cold weather or the devastating effects it can have on people and property. When I moved back to Texas two years ago to open Matthiesen, Wickert & Lehrer’s Austin office, I assumed I was saying goodbye to cold weather forever.

I was wrong. While the temperatures in Wisconsin hovered around 10°F, the mercury dropped to an astonishing 6°F in Austin last week, lower than any week in history other than one in 1983. We also set an all-time record for 6.5 inches of snow in a single snowfall. Streets were covered with ice and drivers in ditches due to their only experience with ice being unsweetened iced tea. Vehicles could not make it up hills and were colliding with other vehicles and stationary objects. Many houses with plumbing and hot water heating systems outside of their homes were experiencing frozen pipes which led to inevitable flooding once the pipes thawed. Power outages after a week of freezing led to 3 million people being without power and the price of energy in Texas skyrocketed to $10 per kilowatt hour (kWh) compared to $.05 in Wisconsin. The loss of power meant loss of heat, which exacerbated and compounded the resulting damage. Insurance claims resulting from water damage resulting from frozen pipes alone could be in the tens of millions of dollars. Ice on the roads does not excuse drivers from exercising caution and will also lead to tens of millions of dollars in property damage claims. Plumbers will be in high demand and homeowner insurance claims will certainly be on the rise.

All too often insurance claims professionals assume that cold weather in a southern climate is an “Act of God”, excusing any third party responsible for not protecting the home from the foreseeable flooding. The damage plumbers are seeing across the South today far exceeds what they responded to during the deep freeze of January 2018.

Most people remember from grade-school science class that water expands as it freezes. There is also a common misconception that this expanding ice physically causes a pipe to rupture. However, this expanding ice is often only one part of the equation, in that most pipes actually burst because of excessive water pressure created by the blocked or plugged pipe.

As water freezes, it expands and creates a blockage within the pipe. In fact, water expands by 9% when it freezes. This frozen water blockage pushes the remaining liquefied water in the pipe towards closed faucets and fixtures. This causes an immense amount of pressure to build up between the blockage and the closed fixture. Eventually, the increased pressure causes the pipe to burst; however, the failure is not at the location of the blockage, but somewhere between the blockage and a household fixture. This has several different consequences for subrogation professionals.

First, while the frozen water itself may be an act of nature, care should be taken to investigate what caused the water to freeze. Did a piece of HVAC equipment, such as a furnace or thermostat, fail? Was there recent repair work performed on the HVAC equipment that may have allowed it to fail? Did the residence run out of heating fuel that is supposed to be supplied under contract with a local provider? These are all examples where a third party may be liable and where subrogation may be available.

Second, as explained above, the location of the failure does not immediately point an investigator to the location where heat may have been lost in the building (or the location where water in the pipe froze). This is especially true in commercial buildings, where piping may travel great distances to get water to bathrooms or offices. Heat could be lost in one area of the building, causing the water to freeze within the pipe, while the pipe bursts in another area of the building. Along with the investigative questions previously discussed, you may also want to ask whether another tenant was responsible for keeping its unit heated (and failed in that duty)?

Owners and contractors may be to blame.

Chapter 3 of the Plumbing Code of the Texas Industrialized Housing and Buildings Program provides:

Water, soil and waste pipes shall not be installed outside of a building, in attics or crawl spaces, concealed in outside walls, or in any other place subjected to freezing temperatures unless adequate provision is made to protect such pipes from freezing by insulation or heat or both. Exterior water supply system piping shall be installed not less than 6 inches (152 mm) below the frost line and not less than 12 inches (305 mm) below grade.

The “adequate provisions” referenced above cost money and are frequently overlooked because…well…it’s always warm outside.

One interesting frozen pipe subrogation opportunity which is almost always overlooked is the case involving improper installation of a “hose bib.” A “hose bib” is an outside water spigot structure. It is also known as a “sill cock”, a water faucet placed outside of a home. If installed at the wrong angle, water will not drain from the pipe which is exposed to the cold, resulting in freezing and flooding. 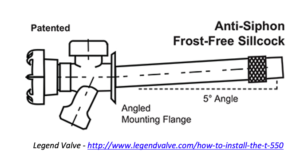 Proper installation requires it to be pitched upward at a 5° angle. This allows any water in the horizontal pipe to drain when the spigot is opened, preventing freezing.

Even seasoned subrogation professionals can overlook these key elements in investigating the recovery of a property damage claim due to a “frozen” pipe. Do not give these claims the cold shoulder, and you could receive a warm response to your subrogation inquiries.

Wickert is an insurance litigation associate in the Austin, Texas branch of Matthiesen, Wickert & Lehrer, S.C. He is licensed to practice in Texas and Wisconsin.