The unprecedented Arctic blast that has gripped the U.S. for much of the week has paralyzed natural gas pipelines, brought deadly ice storms to Houston and is about to get worse.

Nearly 300 new daily temperature records could be set, mainly across the Great Plains from Canada to Texas through Tuesday, said Marc Chenard, a senior branch forecaster at the U.S. Weather Prediction Center. New York City will be dealing with ice and some snow showers from Saturday through Tuesday, with highs mostly hovering just above or below freezing.

As much as 6 inches (15 centimeters) of snow could fall in Forth Worth, Texas, over the weekend, with temperatures possibly plunging into the single digits Fahrenheit on Monday. A 130-vehicle pileup on Thursday on an icy highway in the city left six dead and dozens injured.

The cold is also weighing on the state’s sprawling energy infrastructure. Natural gas pipes and processing plants are starting to shut, disrupting output of the heating fuel. 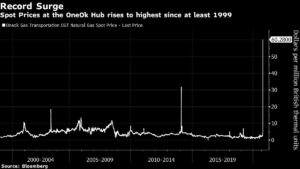 “It is going to be a mess,” said Jason Dunn, a National Weather Service meteorologist in Fort Worth. “This is extremely unusual. I would go as far to say that it could be a historic event.”

Furthermore, a series of winter storms will ride along the leading edge of the cold from the Pacific Northwest to the East Coast. That could bring 6 to 12 inches of snow across western Washington and Oregon, including Seattle, while ice and sleet could touch Houston before coming up the East Coast early next week.

The Electric Reliability Council of Texas, which oversees the state’s main power grid, warned of record power demand due to extreme temperatures. The average spot price for electricity in North Texas was $292.53 a megawatt-hour as of 10 a.m. local time, according to grid data complied by Bloomberg. That compares with an average of $17.83 so far this month.

Prices for gas, propane and heating oil, fuels used to heat homes, are also surging, and not just because of elevated demand. Temperatures are low enough to trigger so-called freeze-offs, when wells shut down because of liquids freezing inside pipelines. Texas facilities operated by pipeline companies DCP Midstream LP and Targa Resources Corp. were reported shut on Thursday due to the cold. Enbridge Inc. said it was limiting requests to transport gas on a pipeline stretching from Texas to New Jersey.

The impact on regional gas prices has been dramatic. The rate for next-day delivery at the Oneok hub, which hauls Oklahoma gas to networks serving the Midwest, closed at the highest since at least 1999 on Thursday. Gas futures climbed as much as 3.4% Friday.

Chenard said the country can expect a mix of ultra-cold lows, with high temperatures that struggle to be anything but frigid. What makes the outlook all the more remarkable is that it’s the dead of winter, so the air has to really chill to set new marks.

Also noteworthy is how far into Texas the cold will get, along with the potential of snow, sleet, and freezing rain reaching Houston late Sunday into Monday. In Lubbock, Texas, Monday’s forecast high will be 14 degrees Fahrenheit, which will shatter the old record of 30 for the date. Usually, any snow that falls in the region quickly melts, but the cold air will keep it around for days. Dallas hasn’t had a major winter storm since 2015.

“You don’t often see records being broken by that much,” Chenard said.

The crash in Fort Worth highlights a major problem winter weather poses when it strikes across the South, Dunn said. “Folks out there are just not used to it,” he said. “They are not used to driving on it and add in the bitter cold and they are just not prepared for it. The travel will become life threatening.”

In addition, much of the area’s infrastructure is exposed, or cities lack the plows to clear roads quickly, Dunn said. Even area airports may struggle to keep de-icing operations going to allow planes to take off safely.

While temperatures will chill along the East Coast, they won’t be as extreme as what sweeps across the Great Plains and Midwest. It will be a parade of storms bringing ice and snow that may cause the most issues along the Atlantic coast.