California legislation that would have forced insurers to pay more coronavirus business-interruption claims was put on hold last week when state lawmakers decided not to return from their summer recess because of a resurgence of the disease.

Assembly Bill 1552 appeared to have a better chance of winning passage than any of the bills introduced in 10 states so far. All of them, in one way or another, would change rules to make insurers liable to commercial property owners for income lost because of closure orders.

AB 1552 passed the state Assembly 77-0 on June 26 and was awaiting a vote in the Senate when leaders decided to end the session early. Normally, the legislative session would not have ended until Aug. 31. Leaders in the Assembly and Senate decided to cancel today’s return to Sacramento after six staffers, including Assemblywoman Autumn Burke, D-Inglewood, were sickened by the virus. Leaders have given no word about when the session might resume. 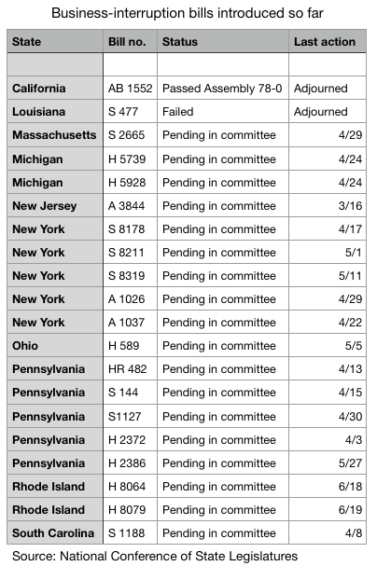 Legislation introduced in other states to make insurers liable for COVID-19 business-interruption claims has barely moved. Bills were introduced in Louisiana, Massachusetts, Michigan, New Jersey, New York, Ohio, Pennsylvania, Rhode Island and South Carolina. The Louisiana bill failed when the legislature adjourned. None of the measures introduced in the other state houses have moved out of committee. No action has been taken on most of the bills since April or May, according to a National Conference of State Legislatures database.

The insurance industry has objected to the legislation, saying it’s unfair to change the rules of their contracts retroactively. The California bill took a unique approach that may have made it better able to withstand a constitutional challenge.

The White and Williams law firm said in a blog post Thursday that the California bill is the only bill introduced in the 10 states that would create rebuttable presumptions that affect the burden of proof in coverage cases. The courts would be required to presume that for any business interruption caused by closure orders that:

According to the blog by attorneys Edward Koch and Felix Yelin, most of the bills introduced in the other states mandate coverage and would face constitutional challenges.

“Legal challenges would still be likely if Bill 1552 is passed, although it could involve novel issues involving whether statutory-mandated rebuttable presumptions for key coverage determination elements are still unconstitutional impairment of contracts,” the blog says.

Insurers have argued that for the vast majority of policies, they are liable for business-interruption losses only if a covered peril, such a landslide, earthquake or hurricane, causes physical damage to the property or an adjacent property and blocks ingress. A Michigan state trial court judge agreed with that argument last week and dismissed a lawsuit filed by two Lansing restaurants in what may have been the first final ruling on a COVID-19 business-interruption lawsuit.

The legislation in other states took some novel approaches to force insurers to pay business-interruption claims.

Under New Jersey’s Assembly Bill 3844, for example, insurers would be required to pay claims but could then seek reimbursement from the state, which would collect funds through an assessment on all authorized insurers, according to an analysis written by theEversheds Sutherland law firm.

Pennsylvania Senate’s S. 1127, introduced on April 30, does not direct insurers to pay business interruption claims; instead, it would effectively override many of the defenses insurers assert in response to COVID-19 claims, Eversheds Sutherland said.

Bills introduced in Pennsylvania, Massachusetts and South Carolina attempt to give policyholders a route around policy language that excluded coverage for viruses.

The National Council of Insurance Legislators has strongly objected bills that seek to overturn Insurance Service Office policy language that has been added to many commercial “all risk” property policies since 2006.

“Such state legislation would violate the Contract Clause within Article I of the United States Constitution, which prohibits the Legislature from impairing the obligation of contracts,” NCOIL said.

The organization suggested that Congress create a victims compensation fund for small business owners impacted by the virus.