Baltimore, Maryland retained its title as the most accident-prone metropolitan area in the nation for automobiles, while Brownsville, Texas took the No. 1 spot for auto safety, according to Allstate’s annual America’s Best Drivers Report.

The careful motorists in Brownsville collided with each other on average only once every 14.95 years, according to Allstate. In Baltimore, motorists are involved in collisions an average of once every 4.2 years. The national average is one collision every 10.57 years. 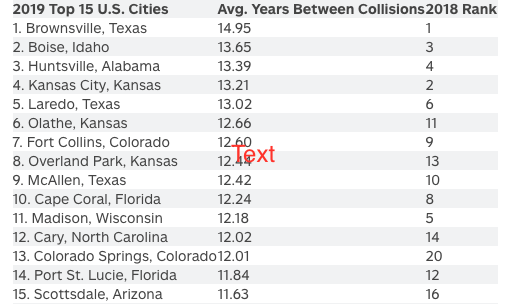 Brownsville also took the top spot in 2018 and 2016. Baltimore was the lowest ranking city last year and came second-to-last behind Boston in 2017.

Allstate releases the report each year at the beginning of the summer driving season, ranking 200 metro areas according to how many claims are filed. This year’s report was based on property damage claims during the two-year period of January 2016 through December 2017.

This year — the 15th since the report was first released — Allstate added a new section to the report that notes the worst roads for auto collisions in the 15 cities that ranked lowest for safety. In Baltimore, that honor went to Interstate Highway 695, which locals know as the Beltway.

Allstate said it hopes the added information will educate drivers to be extra vigilant on those dangerous roads, in addition to advocating for infrastructure improvements.

The report shows that densely populated urban areas with high levels of precipitation and old infrastructure were well represented in the lowest ranking cites for collision frequency. Washington D.C. and neighboring Alexandria, Virginia; Boston, Worcester and Springfield, Massachusetts; Providence, Rhode Island and Philadelphia made the bottom 15. 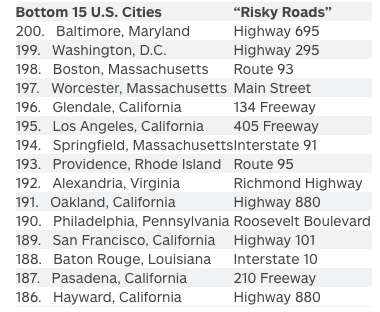 But the worst-ranked cites also included the most densely populated urban areas in sunny California: San Francisco, Oakland and their neighbor Hayward; as well as Los Angeles, Pasadena and Glendale.

Another element of the report provides data on hard-braking incidents collected from Allstate-insured motorists who are enrolled in the carrier’s Drivewise telematics program. That data shows the city’s with the most collisions also had high numbers for white-knuckled driving.

Baltimore, for instance, had 30.58 hard-braking incidents for each 1,000 miles driven. That compares to 15.63 for Boise, which ranked No. 2. Hard-braking data for Brownsville was not available.

The highest rate of hard-braking was 43.88 per 1,000 miles in Philadelphia, which ranked 10th from the bottom in the number of collisions. The lowest was 8.73 in Austin, Texas. A few more hard brakes may have been useful in Austin. The city’s collision rate one accident every 7.6 years, ranking 160 out of the 200.

Statistics show that on a per-capita basis, vehicles are colliding less frequently than they used to — at least fatally.

A statistical projection of traffic fatalities for 2018 shows that an estimated 36,750 people died in motor vehicle traffic crashes, down 1% from the previous year, according to National Highway Traffic Safety Administration report released this month. NHTSA statistics show the number of fatalities nationally climbed from 26 in 1899 to a peak of 54,589 in 1972, and has ranged from about 32,000 to 37,000 since 2011.

The number of registered vehicles in the United States more than doubled since 1972 even as the fatality rate declined. In other words, vehicles are about half as likely to kill as they once were.

But the number of fatalities has been ticking up since 2015 after holding steady for the previous five years. The numbers beg a question: Has the advent of smart phones counteracted a long-term trend toward fewer fatalities?

“I don’t have empirical data on that, but I will absolutely give you my opinion,” Rosen said. “I would say emphatically yes.”