As teens get ready to head back to school this fall, a new study conducted by Liberty Mutual Insurance and SADD (Students Against Destructive Decisions) finds that older teen drivers are overconfident and perceive themselves as safer drivers despite experiencing more accidents and near misses (57 percent of seniors) than their younger peers (34 percent of sophomores). Parents may be unknowingly opening the door to this behavior as consequences taper off for older drivers. Nearly 70 percent of teens ages 15 and 16 say they would lose their driving privileges if they were to get into an accident whereas only 55 percent of teens 18 and older believe they would experience the same consequence. 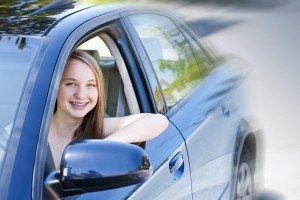 “It’s natural for teens to gain confidence behind the wheel as they get older and log more driving hours,” said Dr. Gene Beresin, senior advisor on adolescent psychiatry with SADD and Executive Director of The Clay Center for Young Healthy Minds at Massachusetts General Hospital. “However, this age group is more likely to test the boundaries as consequences for bad driving behaviors decrease and their freedoms and responsibilities at home increase, making them feel more like adults. As a result, it is even more important for parents and teens to have conversations about safe driving practices to avoid potentially putting themselves and others at risk on the road.”

In the study, 67 percent of seniors admit to using apps at least sometimes while driving compared to 49 percent of sophomores and 58 percent of juniors. Other dangerous behaviors behind the wheel continue to become more prevalent as teens rise the ranks, including:

“Older teens are still inexperienced drivers – even if they feel otherwise – as they only have one to two years of real-world practice under their belts. That’s why it is important to continue to emphasize the effects and potential consequences of phone use while driving to this age group,” said Mike Sample, MS, CSP, lead driving safety expert and technical consultant at Liberty Mutual. “Using an app behind the wheel, even glancing away for a second, can impair your driving ability and set off a chain reaction that could lead to a near miss or crash. Hyper-connected teens must be reminded to always pull over before using their phone. It is just not worth the risk of crashing.”

Liberty Mutual Insurance and SADD commissioned ORC International to conduct a quantitative survey that measured teen driving attitudes and behaviors. The survey was conducted April-May 2017, among 2,800 teens from high schools across the country. Overall the findings from the Teen Driving Study can be interpreted at a 95 percent confidence interval, with an error margin of 1.9 percent (survey). Error margins for subsets such as licensed drivers will be wider. Additionally, the study included a survey of 1,000 parents of licensed teenage drivers that has an overall error margin of 3.1 percent.