Drivers in San Francisco, Manhattan and Tel Aviv may soon have another safety tool at their disposal: a mobile app that alerts them to dangers ahead in the road.

Nexar Ltd., an Israeli startup whose app records video from a smartphone’s camera to capture hard brakes and collisions, will from today turn its users into a vehicle-to-vehicle network to prevent crashes before they happen. The app is already used by professional car fleets and insurance companies to reconstruct traffic accidents. 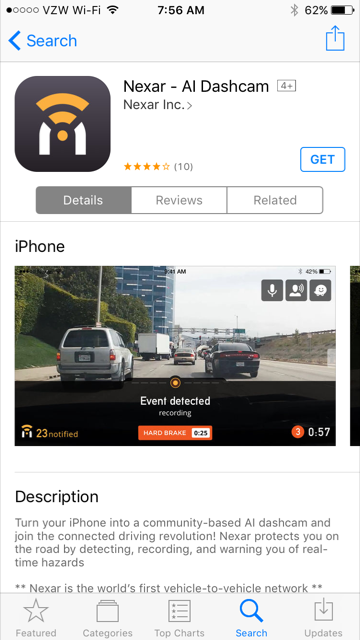 Using the suite of phone sensors such as the accelerometer and gyroscope, Nexar installed in one car will be able to send an alert to a driver in another vehicle if it makes a sudden stop, for example, or if an obstacle is blocking traffic. These sensors are delicate enough to let the app log potholes and other damage to roads as a car is driven over them. Data is uploaded to remote servers via either Wi-Fi or cellular connection depending on the urgency of the data recorded then made accessible to other installations of the app.

Since launching in February with its recording application, Nexar has signed on 50,000 users in Tel Aviv, San Francisco and Manhattan, clocked about 2 million driving hours, and recorded about half a million instances of dangerous driving events, according to Chief Executive Officer Eran Shir.

The number of fatalities from car crashes increased more than 7 percent in the U.S. last year, according to the National Highway Traffic Safety Administration. Wide-scale deployment of vehicle-to-vehicle networks could prevent about 79 percent of all collisions, the administration said in a 2014 report. The U.S. government issued its automated vehicles safety policy in September, following the fatal Florida crash of a Tesla Model S whose driver was using its Autopilot technology.

According to ResearchandMarkets, the connected car market is growing at about 11 percent annually, and is expected to reach $80 billion by 2025.

“We see the future ahead of us as a future of autonomous vehicles and roads that will need to be managed and optimized, and we think we can play a major role there,” Shir said in an interview. His previous company, ad-creation startup Dapper, was acquired by Yahoo! Inc. in 2010.

Nexar, which has raised $14.5 million from investors including the Israeli venture capital fund Aleph, will continue to offer its app to drivers for free, while monetizing data collected on the network to help insurance companies pay less on claims and encourage governments to improve roads by providing information on potholes and intersections for municipalities. One insurance company in New York offers drivers discounts if they use Nexar, and autonomous vehicle companies are using the data to train and test their vehicles, said Shir, declining to give specifics.

Partnerships include Waze Inc., a Tel Aviv-based navigation company acquired by Google in 2013 for about $1 billion, whose software can be loaded within the Nexar app.

“We live in a crazy world where everyone talks to us about autonomous vehicles and a zero-accident future, but every year collisions grow by 10 percent,” said Shir. “The main reason for that is the smartphone and the way we use them irresponsibly while we drive. What we are trying to do is make it part of the solution, not just part of the problem.”

Israel is increasingly becoming a go-to country for autonomous car technology. Jerusalem-based Mobileye NV, a maker of chips and software, broke off its partnership with Tesla Motors Inc. earlier this year, but is still working with BMW AG, Intel Corp. and Delphi Automotive Plc to develop software and mapping technology.

Nexar isn’t in competition with companies like Mobileye, said Shir, who is worried about other startups entering the same field and beating him to creating a product not just for professional drivers, but for everyone on the road. “In short, getting the market fit for the overall population is our biggest challenge,” he said.

According to Zirra.com Ltd., an Israeli company that analyzes the private tech market, Nexar has a number of competitors. They include Israel’s Anagog Ltd., that also alerts drivers to traffic conditions, and California-based Civil Maps, which uses AI and local vehicle-based processing to convert car sensor data into mapping information. Google could also enter the space, Zirra said in a report.