During my first decade of practicing law in Texas, I enjoyed a good professional relationship with Texas Governor Greg Abbott. In those days, Abbott, who is my age and earned his law degree one year after me, was a young defense attorney with the Houston law firm of Butler Binion, and was opposite me in many a subrogation case. He was a great track and field athlete during college and enjoyed running. He might also be the unluckiest man on earth. On July 14, 1984, while running along a sidewalk in the upscale Houston suburb of River Oaks, a 75-foot “Post Oak” tree fell on him, crushing his lower spine and instantly rendering him a paraplegic. He has been in a wheelchair ever since.

Abbott sued the homeowner (prominent divorce attorney, Roy Moore) whose tree fell on him, along with a tree service company (Davey Tree Expert Company). Moore testified that he was surprised to learn that the big tree had “rotted from the inside.” Abbott’s lawyer, Don Riddle, alleged that Moore and the tree company were negligent for failing to warn people about the dangerous tree or to take action to prevent it from falling. Basal decay in a Post Oak tree cannot be corrected by fertilization, but that is what Davey had recommended. According to news reports from 2002, Abbott won a confidential settlement of more than $10 million. Ironically, Abbott sat on the Texas Supreme Court during the years that the Court implemented significant tort reform measures in Texas.

I never forgot Abbott’s experience, and today, our clients send us at least one or two of these types of insurance claims (property and bodily injury) weekly to evaluate for subrogation potential. Damage resulting from falling limbs or trees remains one of the most overlooked areas of third-party liability and subrogation. They are also the most poorly investigated. Whether the owner of a tree that has fallen is a private citizen or a municipality, subrogation professionals must be aware of available tort remedies and be prepared to properly and promptly investigate and dispatch the appropriate expert to document the condition of a fallen tree before the critical evidence reaches the chipper. 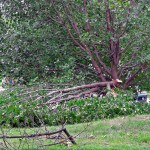 While the law of premises liability varies from state-to-state, the law generally is that in order to hold a property owner liable for damage caused by falling limbs or trees located on an owner’s property, the owner must have actual or constructive notice of the risk. This can be actual notice (e.g., they are advised by local tree company to cut it down or portions of the tree have already fallen) or constructive notice (dangerous condition is obvious and existed for such a length of time that the owner should have known). In finding negligence, courts and juries will look at a variety of factors including the amount of time the condition existed, the size of the premises, the type of condition and when a reasonable person would have discovered the condition. It would be prudent for landowners to conduct periodic inspections of trees located on their property to ensure the safety of others and surrounding property. While the early common law was generally that owners were not liable for physical harm caused to persons not on their property, even if the conditions may be highly dangerous or inconvenient to neighbors, things have evolved. Today, most owners have a duty to exercise reasonable care regarding natural conditions on their land which lies adjacent to a highway or waterway.

Trees on public property also rot. State and local government enjoy sovereign immunity, except when waived by state law. For many municipalities, there is a duty to make periodic visual inspections of trees on public property. The inspections should be done by qualified people (e.g., certified tree inspectors). They usually have a duty to remove obvious dangers and do preventive maintenance, and may be held liable for foreseeable harm that could have been prevented. While the laws governing governmental liability for falling trees also varies, some states (e.g., Illinois) provide that a municipality does not enjoy absolute immunity from liability, but is liable only for “willful and wanton” conduct. This burden can be met by showing that the municipality was informed about a dangerous condition and knew that other persons had previously been damaged because of the dangerous condition.

In other jurisdictions, such as Minnesota, only conduct of a policy-making (discretionary) nature is entitled to immunity. A city’s policy to trim trees along high-traffic roads before trimming trees on low-traffic roads is an example of an action that gives the city immunity. In determining where or how to trim trees along roadways, the city has to make choices based on its budget and other factors. At the same time, a city employee who negligently trims or an inspector who doesn’t recognize an obviously-rotten tree that poses a hazard, may subject the municipality to liability.

Unsafe trees often give little indication of decay or instability. Rot tends to grow from the inside out, and trees can easily become unstable long before there are any visible indications of trouble. In investigating these losses, we must focus on showing that the defendant should have discovered the tree’s condition and the extent of the defendant’s duty to inspect trees for rot and other signs of interior decay. This includes both objective evidence such as warnings from neighbors or tree services, as well as more subjective evidence such as the obvious nature of the tree’s deterioration. Photographs of the tree should be taken and portions of it preserved for later review and use at trial.

Engage the services of an inexpensive arborist and ask him or her to document the tree’s condition. Warn the property owner immediately after the loss not to dispose of or move the evidence until an investigation can be conducted. Engage subrogation counsel to advise you on the burden of proof you face in the particular jurisdiction you are dealing with.

Last fall, the top of a London Plane tree fell on to a group of chess players in New York’s Bryant Park, injuring five people, including one child, and leading to a host of subrogation opportunities. The same day, a tree fell in Charleston, South Carolina, destroying a section of a home. These are not rare or unusual instances.

When a tree falls in the woods, it does make a loud sound. When it falls in populated areas, it can be heard throughout the claims department and should be aggressively pursued for any and all subrogation potential.