The start of spring means it’s the season for wet and often wicked weather, which can be unpredictable and may include sudden, severe and damaging hail storms that homeowners must endure, according to the Farmers Insurance Seasonal Smarts Digest.

Farmers data shows that 39 percent of all hail-related homeowner claims occurred from March to May over the three-year period from 2013 to 2015. The Midwest, in particular, faces a significant potential for hail-related damage, as hail claims account for approximately three-quarters of all home claims in Nebraska and Montana during spring and more than half of all claims in Kansas and Oklahoma. 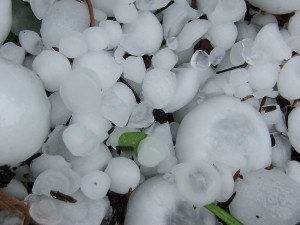 “Spring is the season for the rebirth of flowers, birds and wildlife, as well as for the arrival of a new set of violent storms, including hail and tornadoes, that can greatly impact homeowners and their property,” said Paul Quinn, head of claims customer experience at Farmers Insurance. “Our data shows that homeowners can potentially face a spring full of costly problems such as hail, wind damage, and weather-related flooding and drainage issues inside their homes as the weather warms up and storms begin to roll in.”

Hail storms, which are frequently touched off by thunderstorms and subsequently form tornadoes, can be serious threats for homeowners. The larger the hail stones, the greater the damage to roofs, siding, windows and exterior glass, such as skylights. Hail causes about $1 billion of damage annually to property.

Although hail storms can present their own unique dangers, homeowners should be prepared for other common household challenges this spring. Farmers data shows that nearly one-third (31 percent) of an entire year’s claims resulting from wind damage occur between March and May, which is an increase of 59 percent from the chillier winter months. The storms may also bring the potential for water issues, as more than one-quarter (29 percent) of claims related to wet, rainy weather getting inside of homes and causing damage occur during the spring.

The Farmers Seasonal Smarts Digest is released four times per year to provide drivers and homeowners with knowledgeable, straightforward and proactive tips to help mitigate potentially dangerous and costly insurance losses. The digest examines a three-year window (2013 to 2015) of Farmers Insurance’s historical claims database to identify seasonal perils and the states where they most commonly occur.