In the brief and fleeting instant a vehicle accident occurs, so many things happen so quickly that it is virtually impossible for those involved, including witnesses, to fully process everything until after the fact.  Each witness’ account of the accident is influenced by many variables – where they were, what they were doing, how distracted they were, what the topography and visibility were, and none of that adds up to 100 percent reliability.

If the circumstances of the accident result in legal action and end up in court for a jury to determine responsibility and remediation, the outcome of the case relies heavily on accident reconstruction. An accurate recreation of the scene including vehicle(s), people and objects pertinent to the issues, is key to explaining what happened, why and who or what may be at fault. The reconstruction also plays a vital role in the jurors’ decision-making process. The information gathering and then recreation are both multi-step processes that have benefited from advances in technology.

Retrieving all relevant information is the first step, and luckily much of the data (at least in newer cars and trucks) is provided by the vehicle itself via its GPS and electrical data system. Police accident reports, cameras in use on the street outside buildings, police dash cams, cell phone records and, in some cases ‘black boxes’ from certain vehicles, also serve as essential tools in enabling a legal team to pull multiple data points together and present it to the jury in a clear, concise and believable manner. Google Earth can be an invaluable resource for establishing the site of an incident and also for providing real-world scale.

Once all of the incident data has been collected, and the narrative of ‘what really happened’ is ready to be told, it is then up to the litigation team (attorneys, experts, animators and consultants) to collaborate and choose the best and most effective vantage point to communicate that story to the jury.

Some of the factors that should be considered in determining which communication strategy works best include:

For a vehicle accident reconstruction, topographical information is often used to identically replicate the surroundings of the actual scene. For example, the jury can be virtually placed in the vehicle to ‘see’ through the eyes of the driver using 3D modeling programs such as 3DS Max and Maya. The value of a 3D computer model is the ability to view a scene or object from any angle, including from the eye-views (site lines) of involved parties or witnesses.

3D software enables the construction of accurate scale and animated models. Experts can then use the models to create highly persuasive visual demonstrations from any relevant angle to best convey the situation. The final rendered output is brought into a program, such as, After Effects for compositing of 3D layers, addition of special effects, and any labeling that may be required. This process produces visually rich recreations that are as close to real life as current technology will allow.

In some recreation situations, where topography and elevation might be important for accuracy (such as a rocky region or some form of rough terrain), use of a 3D scanner can be helpful. The scanner preserves scenes and objects into a highly accurate ‘point cloud’ – its millions of points in space depict a grey scale or color image in 3D, real-world scale.

Once the 3D scan is imported, the digital information can then be incorporated directly into a graphics program such as 3DS Max, or used as the basis for the creation of a mesh model. A mesh is a collection of vertices, edges and faces that define the shape of an object within a 3D graphics program. Upon the point cloud’s conversion into a 3D surface, it can be moved or manipulated and images of the object can also be rendered to other more common video file formats to be viewed outside of the software.

Point clouds can also be used to represent volumetric data used in medical imaging, such as CT scans or MRIs. This data can be extracted to make medically accurate models of the human anatomy. Most often it is used to represent areas of the skeletal system to highlight any abnormalities or injuries to the bones or soft tissue.

When figure models are required to illustrate how a person’s body was affected by an accident, modules and plugins can be imported into 3D software which contains customizable figures easily adapted to simulate a person’s height, weight, age, gender, race and clothing. Those figures can be seamlessly incorporated into a 3D model and manipulated per the expert’s direction to convey how forces applied to the body cause injuries, and what the severity of those injuries might be according to standard calculations of g forces. Image A below illustrates this showing a 3D figure is placed in the driver seat of a vehicle. This scene depicts a rear end collision. The model is an accurate representation of the actual driver’s height and body size. The motion of the body resulting from the collision is recreated here, and through the use of transparency and overlay, we can see how the movement of the driver’s spine causes the injury. 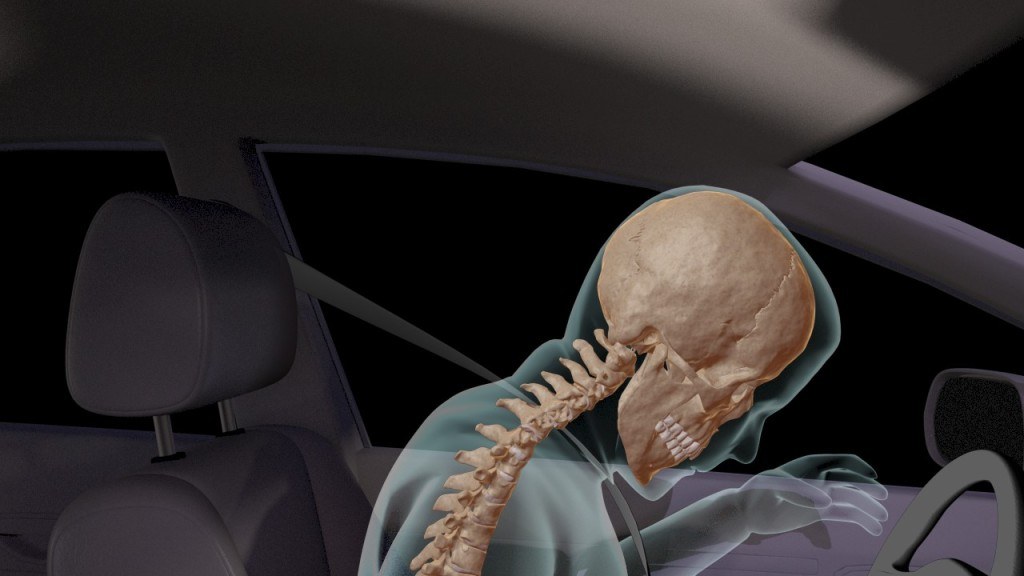 All of these images (the figure, the skeleton, the car) are created in a program called 3DS Max. Then the layers were brought into After Effects for compositing (where the labeling and transparencies are done).

The still-rendered Image B shows the behavior of the human body, specifically the spine, at the moment of impact. The image then transforms to show the injuries that were immediately sustained and the post-accident procedures needed. 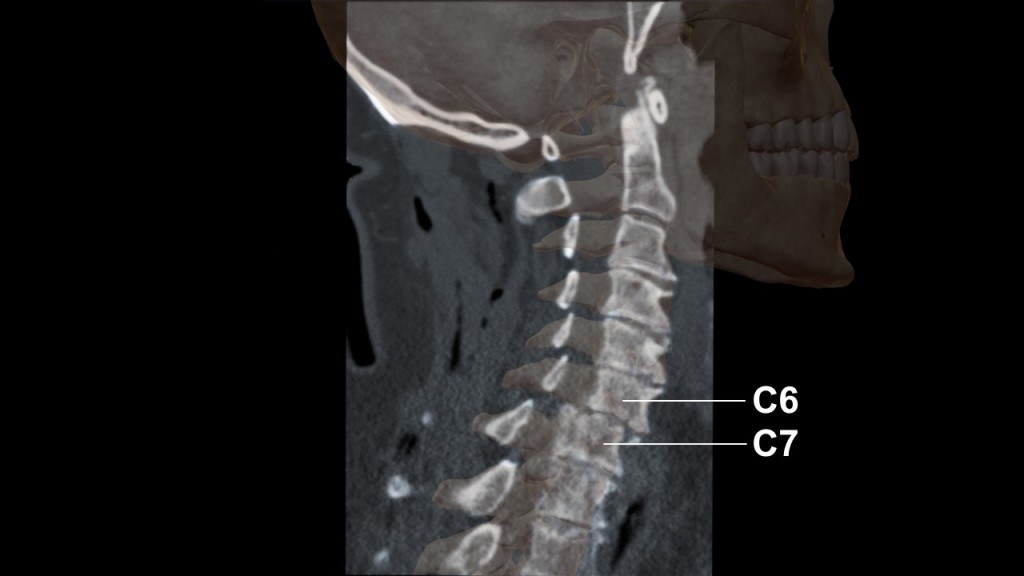 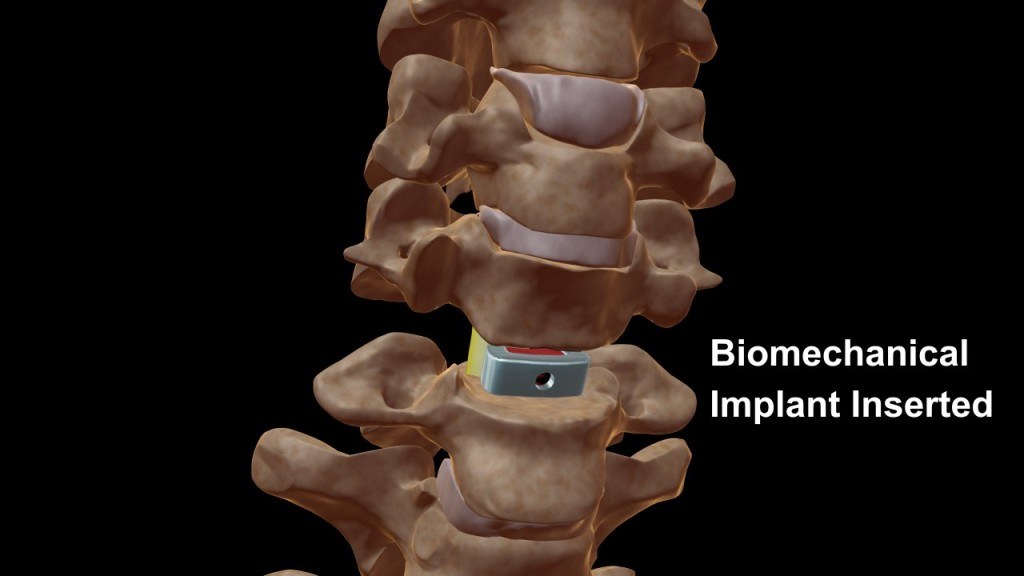 This is a depiction of a spacer bone graft being inserted into the open disc space for a spinal fusion just after an anterior cervical discectomy was performed.

Depending on the goal of the animation, other views such as satellite overviews or side angles might be the more effective option in depicting the accident.

What Do Jurors Think About Reconstruction Technology?

Years of research and numerous trial experiences have proven that when jurors enter a courtroom for trial, they are expecting a ‘show.’ Post-trial juror polling as well as mock trial focus groups reveal the same message – jurors are more receptive to, and understand more thoroughly, the trial attorney’s story when the proper graphics are displayed. A lack of graphics and visual evidence translates into a lack of attention from the jurors. In fact, jurors will often question the credibility of an argument if they are not shown demonstratives that can best tell the story. 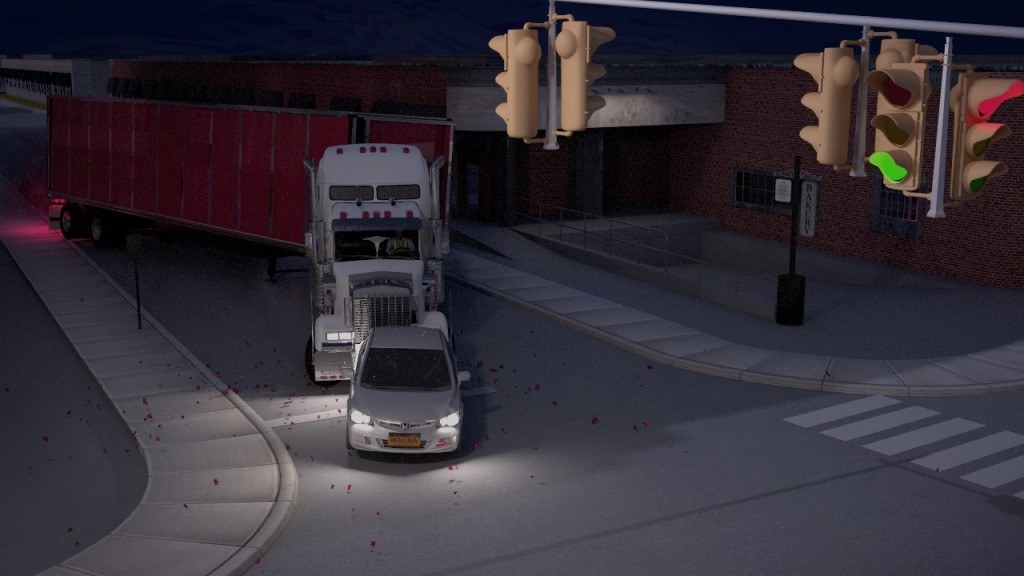