Claims cost per injured vehicle are still increasing in the United States, even though better vehicle safety has helped reduce claims frequency, the Insurance Research Council found in a new report.

The IRC, a division of the American Institute For Chartered Property Casualty Underwriters (The Institutes), said the results point to a need for further scrutiny of what is driving those costs.

“Documenting the specific drivers of cost in the states where cost growth is greatest will be a priority for the IRC in the years ahead,” Elizabeth Sprinkel, an IRC senior vice president, said in prepared remarks. 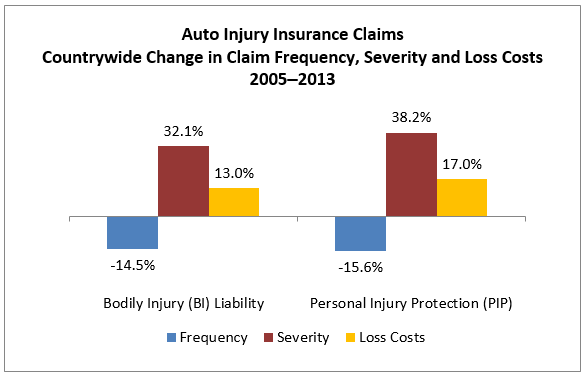 The same thing happened with personal injury protection (no fault) claims, which dropped in frequency from 1.49 to 1.25 paid claims per 100 insured vehicles over the same period. But the average cost per claim jumped in this category from $5,802 to $8,017, according to the IRC, a 38.2 percent hike.

Some states saw jumps that were worse than others. Michigan, for example, had the average payment per personal injury protection claim soar from $25,997 to $44,756 over the studied period, a 72.2 percent jump. Other jurisdictions with substantial increases in PIP claim severity are New York (40.2 percent), Washington (40.1 percent), Oregon (42.3 percent) and the District of Columbia (55.8 percent).

The IRC suggested that reports of a jump in traffic deaths could signify “a change in the beneficial long-term trend of declining claim frequency,” something that could make costs trends more severe.