The auto insurance expenditure-to-income ratio was calculated using insurance expenditure data from the National Association of Insurance Commissioners and, alternatively, from the Bureau of Labor Statistics Consumer Expenditure Survey. Both methods revealed dramatic improvements in national auto insurance affordability over the long-term for average and LMI consumers. Currently, about 1.5 percent to 1.6 percent of income is spent on auto insurance in the U.S. (depending on the data set used) by the average consumer, which represents much lower figures than seen in previous decades. LMI consumers have also witnessed similar trends. 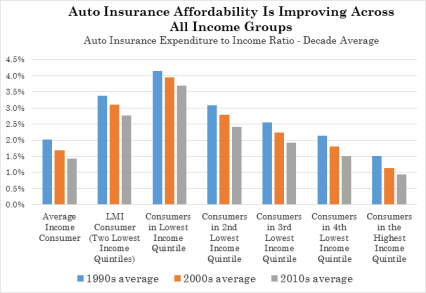 The study includes state estimates indicating that auto insurance affordability has also been improving in most states. All but five experienced improved affordability from the 1990s to the 2000s, and all but four have shown an improvement in affordability between the 2000s and the present. Affordability does vary across states, however. According to the report, auto insurance was least affordable in Louisiana (2.85 percent of income), Florida (2.45 percent), New York (2.42 percent), Delaware (2.18 percent) and Michigan (2.10 percent). The most affordable states were found to be North Dakota (1.03 percent of income), Iowa (1.05 percent), New Hampshire (1.06 percent), Virginia (1.07 percent) and Wyoming (1.08 percent).

“There is a lot of interest in the affordability of auto insurance on the part of consumers, policymakers and regulators. This report adds to the discussion, showing that auto insurance is becoming more and more affordable,” said Elizabeth Sprinkel, senior vice president of the IRC.