Increased scrutiny by federal regulators with bipartisan support from legislators will lead to more frequent and larger auto recalls in the future, according to a new automotive warranty and recall report released by Stout Risius Ross, a global financial advisory service.

The 2015 report, Road Map for a New Era, which highlighted the record-breaking 60 million recalls in 2014 that included defective Takata airbags and faulty GM ignition switches, also reported that small recalls were up 42 percent from 2013. Interestingly, almost 90 percent of the recalls in 2014 were initiated by auto manufacturers.

The authors, Neil Steinkamp and Jake Reed, said the findings suggest there will be a new era in recalls that will include advancement in:

Regulators will become more proactive, the authors suggest, likely the result of the National Highway transportation Safety Administration’s (NHTSA) new director, Mark Rosekind, taking the helm of the highly criticized agency. Besides its newly appointed director the agency has an increased budget, more staff and expanded tools and regulatory powers.

According to the report, “President Obama proposed an NHTSA budget increase of 20 percent each year over six years, including tripling the funding for defect investigations. The budget plan would increase full-time staffers at the agency to 85 (there are 28 as of the release of the report). With the new funds, Rosekind would like to create a trend analysis division as well as a specialized crash investigation group.”

Another factor affecting the likelihood of more recalls is that there were more public complaints filed in 2014 than in 2013 – 75,000 versus 30,000. That, according to the report, has legislators ready to take action.

The report outlined factors, such as increased media attention and the NHTSA’s focus on the potential viability of a 100 percent requirement in recall repairs that will push automakers to meet higher recall completion rates.

Between 2004 and 2013, the average rate of completed repairs on recalls was about 80 percent. Despite this, the report noted that nearly 90 percent of U.S. vehicles recalled due to faulty Takata airbags had not been repaired as of the end of 2014. This was reportedly due to parts shortages and ineffective outreach to older car owners. Other factors that influence completion rates are vehicle age and size of the recall. 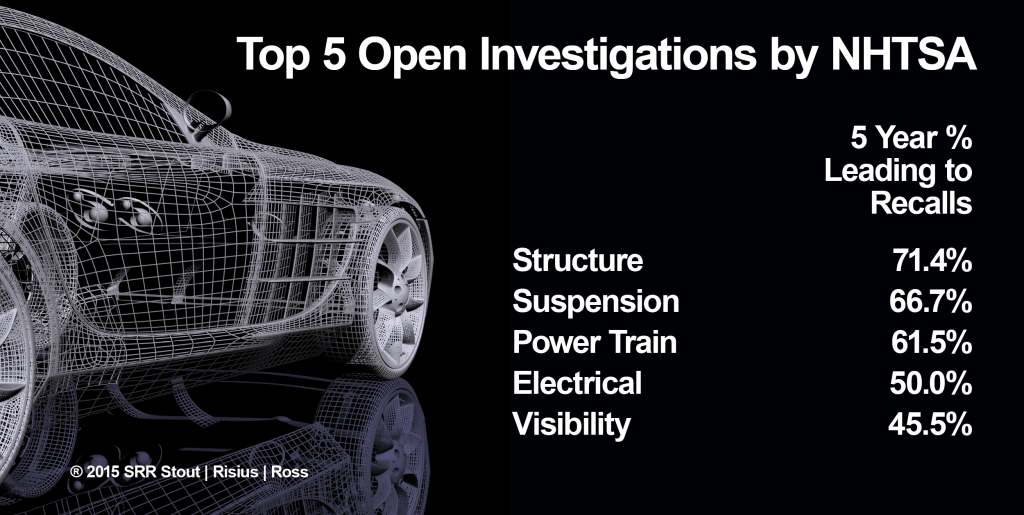 The report outlined component groups at highest risk for recall. These include:

Large suppliers may not be able to stay afloat financially as global recalls become the norm.

“As completion rates increase, recall size increases and the number of recall campaigns remain elevated, the cost of recall campaigns will rise. When combined with greater supplier involvement in product design and engineering, and having greater disclosure in Section 573 letters, suppliers may be facing a greater degree of recall costs than ever before. This can be particularly concerning with respect to Tier 2, Tier 3 and other downstream suppliers that may not be able to bear this financial burden,” Steinkamp said.“The cost of a recall can be significantly more than the profits a supplier earns on the recalled component, especially in large recalls that could cost hundreds of millions of dollars.”

The report authors think GM’s move last year to fund future recalls is a sign of what’s to come.

“After a watershed year for recalls in 2014, regulators and legislators will continue to focus on the auto industry in 2015 and beyond,” Steinkamp said. “GM’s decision last year to proactively accrue funds toward future recalls is a sign of things to come. As automakers and suppliers assess the potential costs of more frequent national and international recalls we may see more robust and explicit financial disclosures regarding recall costs and risks.”