What a brilliant piece of imagination, they told her, to have people pile into vans and go looking for tornadoes.

But storm-chasing tours are quite real – and business is booming, The Wichita Eagle reports.

“It just gets more and more popular every year,” said Charles Edwards, owner and operator of Cloud 9 Tours, which is based in Shawnee, Okla.

So many storm chasing tour businesses have sprung up over the past several years that there’s now a website – Storm Chasing USA – that offers reviews and ratings for more than a dozen of them. The site compares prices and amenities offered by various tours, and includes comments from people who have gone on the tours.

It’s one more sign that what was initially seen as a fad that blossomed in the wake of the movie “Twister” has grown into an industry.

“This is the best year for bookings in our 17-year history,” said Roger Hill, who owns and operates Silver Lining Tours in Watkins, Colo., one of the oldest tours in the business. “We’ve even sold a quarter of our 2016 spots already.

The boom comes despite three consecutive years of relatively quiet tornado seasons, with the number of tornadoes about 30 percent below normal.

Tornado “tourists” pay thousands of dollars to pursue tornadoes on tours that typically last about a week. While at least one tour guarantees participants will chase at least one storm that prompts a tornado warning or they’ll get their money back, it’s common language among tornado tour businesses that they can’t guarantee a tornado.

It’s also standard business practice to require tornado tourists to sign waivers absolving the tour companies of blame should they not see a tornado at all – or should they be injured by a tornado or other severe weather while on the tour.

With the tornado tourism industry becoming increasingly crowded, operators are looking for ways to stand out. Those can include big-screen televisions in the back of the vans, plush seating, free on-board Wi-Fi and nicer hotels when they’ve ended the day chasing.

A few tour operators have steered clear of using vans, opting instead to cater to smaller groups.

“You’ve got to have something different than the next guy,” said Lanny Dean, who only books four or five people at a time for his Extreme Chase Tours based in Mannford, Okla. “Small and tactical is more practical. I don’t want to stack 12 to 15 in a vehicle.

“We give them that one-on-one experience.”

Some tours found it harder to fill all of their tour spaces last year, but bookings have rebounded this year.

“We think that’s probably related to the chaser deaths of 2013,” said Martin Lisius, president and founder of Tempest Tours, another established tour business. The company is based in Arlington, Texas. 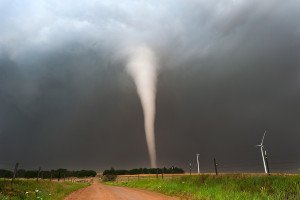 Four chasers – including weather researchers Tim Samaras, his son, Paul, and Carl Young – were killed by the massive El Reno tornado outside of Oklahoma City on May 31, 2013. The weather researchers were deploying probes in front of the tornado when it expanded and accelerated rapidly and took a hard left turn.

Those unforeseen changes caught the trio by surprise, and they were not able to outrun the tornado.

Their deaths rocked the storm chasing community – Tim Samaras was a co-founder of ChaserCon, the national storm chasers convention that is holding its 17th gathering last weekend in Denver – and many in the tour business counted him as mentor and friend.

It also changed how some tour operators do business. For example, Dean, of Extreme Chase Tours, said he’s much more cautious about how close he brings his tour groups to tornadoes.

Years ago, he said, he tried to get as close to a tornado as possible – even slipping into the dry notch between the rain and hail core at the front of a supercell thunderstorm and the tornado at the back end of the storm. Storm chasers call that “riding the hook,” a reference to the hook echo that commonly shows up on radar when a strong tornado is on the ground.

Riding the hook gave his customers clear, dramatic views of the tornadoes because the rain was behind them, Dean said, but they also were vulnerable to any sudden expansions or turns such as the ones that killed Young and the Samarases.

“It hit me exceptionally hard,” Dean said of the deaths. “That tragic event really put things into perspective.

“For us, it was ‘How can we be more safe?’ Everybody wants to go home at the end of the tour.

“We changed a lot of stuff. No more ‘getting up close and personal’ with a tornado.”

Safety has always been paramount at Tempest, Lisius said.

“We have written guidelines that are as safe as we can possibly make them. That’s the gospel around here. We believe there is no reason you should be killed by a tornado.”

A Cloud 9 tour bus was damaged last year when a tornado touched down in Nebraska and knocked a pivot irrigation system into the van, smashing its windshield.

“It just happened so quick there was no way to avoid it,” Edwards said.

No one was injured, he said. The windshield was replaced the next day and the tour went on as planned.

The last three years have featured tornado seasons much quieter than normal.

“It’s just like fishing – you can have a fantastic set-up, but some days the fish just aren’t biting,” Lisius said. “You can’t make them bite. Nature still has to give us something.”

On average, there are more than 1,300 tornadoes a year across the United States. But that number has been 900 or less each of the past three years.

Every Tempest tour was able to deliver a tornado last year, however.

“It’s all about being on the right storm,” said Kim George, guest relations manager for Tempest, the tour company Blum, the author, has worked with a few times in recent seasons.

A healthy portion of tour business is repeat customers – for some, it’s more than half – and veterans know what they’re signing up for each season.

“Even if they didn’t see storms, they keep coming back because they have so much fun on the tour,” said Edwards of Cloud 9 Tours. “We make it clear to everyone that tornadoes are just one aspect of storm chasing. People enjoy the lightning, enjoy the hail, even on the slow patterns.”

At the very least, Dean said, the tours can be a crash course on weather.

“They learn more in six or 10 days than most have learned in their lifetime,” he said. “We’re out to educate and chase and have fun.”

Despite lean years for tornadoes and the tragedy of 2013, he said, he expects storm chasing tours to continue to grow.

“You can succeed in it,” he said. “There’s no doubt about it. The business is out there.”