A year after a brutally cold spell was blamed on something called the polar vortex – which was treated like a northern invasion by the media and as a conquering hero by children impressed by its power to close schools – this week’s chill is little more than what meteorologists like to call winter. Winter storm warnings and alerts were posted in 38 states.

Here are some questions – and answers – about the weather:

A: The Midwest will see the tail end of a storm that could dump as much as 6 inches of snow on Chicago by early Tuesday. That city, which awoke to sub-zero temperatures Monday, is expected to warm to a high of 16 degrees on Tuesday before plummeting to as low as 10 degrees below zero Wednesday morning and no higher than five degrees the rest of the day. 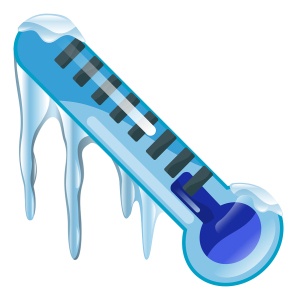 The temperatures pale in comparison to those experienced in North Dakota and Minnesota, where wind chills of between negative 25 and negative 50 degrees hit Monday morning.

Rainy New York City will also be struck by the cold come Thursday, and “will be lucky if it hits 20” with lows near 10 degrees, according to Michael Musher with the National Weather Service’s Weather Prediction Center.

It will be unusually cold in Atlanta on Thursday, when temperatures are forecast to dip into the lower teens, before scrambling up to the lower 20s on Friday.

And in the West, a stream of Pacific moisture that dropped as much as seven inches of rain along the Washington coast is expected to give way to clear skies for the foreseeable future thanks to high pressure moving in. That same high pressure has kept the San Francisco Bay Area – which desperately needs rain – dry.

A: The jet stream is dipping, meaning cold air from Canada and other northern areas is plummeting into the eastern two-thirds of the United States.

Q: IS IT THE POLAR VORTEX?

A: The phrase took on a life of its own last year, and it was blamed for everything from ice storms to all those interceptions New York Giants quarterback Eli Manning kept throwing. But the National Weather Service is skittish about going anywhere near it this time around, with some meteorologists refusing to so much as utter the words.

“We’ve been told to go around that term,” said Musher, chuckling.

But the answer is yes and no. Yes, because as Musher noted, the cold air is coming from near the North Pole. But also no, because the system itself that came all the way down into the United States has so far stayed put in its normal location far to the north of the U.S. border.

Q: HOW CAN PEOPLE PREPARE?

A: Chicago’s history includes a chapter on one mayor who was voted out of office because snow plow crews were too slow to clear the streets. And officials in the colder regions of the country have urged residents to bundle up to guard against hypothermia.

But there don’t seem to be any huge winter storms poised to strike, meaning travel in most places won’t be more difficult than it usually is this at time of year.

A: Temperatures are expected to be lower than normal for days but could rise a bit by the end of the week.

“We have cold temperatures, but it’s not like it never happened before,” said Bob Oravec, a meteorologist with the Weather Prediction Center in College Park, Maryland. “It’s typical for an Arctic outbreak.”