Keeping up with car seat rules and regulations can be dizzying. Laws vary from state to state, and they can differ from recommendations of the National Highway Traffic Safety Administration (NHTSA) and American Academy of Pediatrics (AAP). Those recommendations, in turn, can differ from car seat manufacturer’s instructions. It’s no wonder parents may be confused.

According to Leigh Brown, health educator at Penn State Hershey Children’s Hospital’s Pediatric Injury Prevention Program and Safe Kids Dauphin County, NHTSA and AAP recommendations are based on the safest possible use of car seats for your children.

A change this year to recommendations from the National Highway Traffic Safety Administration involves the LATCH (Lower Anchors and Tethers for Children) system that secures the seat to the vehicle. 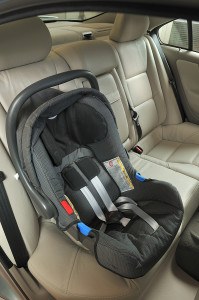 This new protocol requires that car seats be labeled with the maximum weight for use of the anchors. If the combined weight of the child and seat are over the limit, a seat belt should instead be used for installation. Brown says caregivers should always consult the owner’s manual because older seats would still list the old guidelines.

Children should also remain in safer, rear-facing seats as long as their size will allow. Newer infant seats are now built for children up to 40 pounds.

“It really helps to protect the head, neck and spinal column, because when a child is facing forward in a crash there is more head movement,” Brown said. “We all know babies’ heads are their largest part. Facing the rear helps to cradle that area of the body and protect it more in a crash.”

Many other countries keep their kids rear-facing until age four and have fewer injuries and fatalities. Once a child is large enough for a seat with a five-point harness, they should remain in it as long as the manufacturer suggests.

“The harness helps to restrain them more and helps spread the crash forces over a larger area of their body,” Brown says.

When children grow out of their harnessed seats, a booster seat can be used. Booster seats secure children by using the car’s seat belt only. The booster seat’s sole function is to boost the child up so that the seat belt fits at the collar bone and across the hips. However laws differ from the various recommendations on their use as well.

However, most parents don’t heed that advice and are more likely to stop using a car seat because of their child’s age.