The Department of Transportation (DOT) is about to mandate the use of speed limiters – also known as Electronic Control Modules (ECM) – on certain trucks traveling U.S. highways. The department’s March 2014 “Report of Significant Rulemaking” states that this new rule may become reality as soon as October of this year. This rule would apply to trucks weighing over 26,000 pounds and traveling on roads with a speed limit of at least 55 mph. 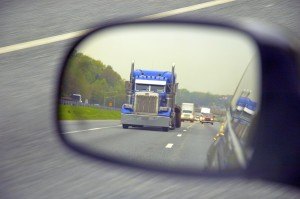 The DOT has not commented on the speed to which the heavy trucks would be limited, but previous proposals had included a limit of 68 mph. Advocates say that the rule would eliminate approximately 1,115 fatal crashes and require minimal investment by carriers since most heavy trucks already have limiters on board. The American Trucking Association (ATA) has even asked for limiters on all new trucks, and the safety advocacy group Road Safe America (RSA) has proposed retrofitting all vehicles manufactured since 1990.

If successful, the proposal would up new avenues of inquiry and opportunity in civil litigation and insurance subrogation.

The petition stated that a key strategy in preventing large truck fatal crashes is to reduce the top travel speed of the fleet. They cite studies showing that large trucks moving at high speeds have much longer stopping distances than the same trucks operated at lower speeds. Fatal crashes involving trucks are more prevalent on higher speed roadways, with 73 percent of traffic fatalities involving large trucks traveling on roads with a posted speed limit of 55 mph or higher.

A speed limiter, also known as a “governor”, operates through a series of electronic sensors which are able to calibrate the vehicle’s speed and transmit that information to the engine’s computer. Once the vehicle reaches a pre-set top speed, the computer restricts the flow of air and fuel to the engine and the sparks that cause combustion (for vehicles with spark plugs).

While diesel engines and gasoline engines both convert fuel into energy through combustion, a gasoline engine mixes gasoline with air, compresses it with pistons, and ignites it from sparks generated by spark plugs. A diesel engine first compresses the air and then injects the fuel. Because compressed air heats up, the fuel ignites.

According to reports issued by the NHTSA and Federal Motor Carrier Safety Administration, and the Insurance Institute for Highway Safety (IIHS), large trucks are involved in fewer accidents than other types of vehicles per 100 million miles driven, but these accidents have a higher rate of fatalities. The DOT reports that:

Though the statistics vary depending on who is issuing the report, the commonality is that truck crashes are rising and often involve a fatality. The IIHS reports that in 2010:

The DOT did a detailed study called “The Large Truck Crash Causation Study” to analyze truck crashes occurring between 2001 and 2003. It reported that events that led to crashes included:

Reports show that 61 percent of fatalities occur on major roads other than interstate highways. Trucks often weigh as much as 30 times more than a passenger vehicle, so the smaller vehicle’s passengers are more likely to die in an accident involving a large truck.

Tractor-trailers also require more stopping distance, especially when loaded, and need a correspondingly increased amount of time to react in order to avoid a crash.

As might be expected, many truck drivers are opposed to the new proposals.

The Owner Operator Independent Drivers Association (OOIDA) has made excellent counter-arguments which boil down to, “Be careful what you wish for.”

OOIDA argues that studies show that speed differentials lead to more collisions, so it’s safer to keep traffic moving at the same speed – something everybody who has pulled behind a truck traveling in the fast lane and trying to pass trucks in the slow lane traveling only 1-2 mph slower than their vehicle will attest to. Trucks all governed similarly won’t be able to pass each other.

OOIDA also cites studies which say that car drivers (usually losing patience with slow-moving trucks) cause most of the collisions with big trucks when there is a fatality.

OOIDA also notes that large trucks are not over-represented in fatal accidents. While they are only 3 percent of all vehicles, they drive 9 percent of all miles driven and are involved in about 11 percent of all fatal crashes.

Lastly, OOIDA says that it is the states’ rights to set speed limits.

The new proposal opens up the possibility of similar maximum speed restrictions on passenger automobiles. After all, proponents argue, why does one need to travel 150 mph?

Limiting the speed of automobiles is an incredibly contentious subject.

Many believe that the government should stay out of the speed issue and leave that to the judgment and responsibility of the drivers. The faster a car travels, the more aerodynamically unstable it is due to wind resistance, so it’s hard to handle. Most drivers simply don’t have the reflexes it takes to handle those kinds of speeds.

Another important factor is a vehicle’s tires. The numbers and letters on the sidewall of a tire represent not only the size of the tires, but also its speed rating – the maximum velocity a tire can sustain before it is at its limit. Most passenger automobiles have S or T rated tires, meaning they are rated for less than 112 mph and 118 mph respectively. Some sports cars have tires with a Y rating, which are rated up to 186 mph. Automobile manufacturers already limit a vehicle’s top-speed to match the speed rating of the factory-installed tires. If a car owner installs tires that have a different speed rating, the owner may be able to raise or lower the vehicle’s top-speed limiter to match the speed rating of the newly installed tires, but it can be expensive to do.

Many passenger vehicle manufacturers already build limits to a vehicle’s top speed into many models by various combinations of ECM settings. However, speed limiters are so controversial and mysterious that entire urban legends have arisen surrounding them. The internet is full of stories attacking certain makes and models of cars by falsely claiming they are equipped with speed limiters. One involves the Nissan GT-R, claiming that the car has a speed limiter but automatically raises its top speed when its GPS system detects that you’ve brought it to a racetrack. Car and Driver reports that this is untrue.

On the other hand, Ford’s MyKey technology – standard equipment on 6 million Ford and Lincoln vehicles on the road nationwide –allows parents to set the maximum speed on a car. It also has the following features:

When it comes to passenger cars, every vehicle is different.Economy cars tend to be limited to about 110 mph (177 kilometers per hour) or thereabouts, while performance cars – particularly European ones – tend to be much higher. It even depends on what engine you select. For instance, on the 2011 Ford Mustang, the V-6 model is restricted to 113 mph (181.9 kilometers per hour), but the more powerful V-8 can go closer to 150 mph (241.4 kilometers per hour).

But the time is fast approaching when proposals will be made to limit the top speed of passenger cars to not much more than the maximum speed limits on U.S. highways. Numerous countries throughout the world, including Europe, already have legislation requiring speed limiters in order to increase safety and reduce fuel consumption/emissions.

The European Community’s (EC) Mobility and Transport Department is approaching speed from an entirely different approach. It is planning to roll out the “Intelligent Speed Adaptation” (ISA) technology as part of a new road safety program by 2020. New cars would have to include camera systems that “read” the speed limit signs and automatically apply the brakes when the limit is exceeded. Vehicles already on the road could even be sent back to garages to be fitted with the “Big Brother” technology, meaning that no car in the UK would be allowed to travel faster than 70 mph – the speed limit on motorways.

The ISA technology works either through satellite, which communicate limits automatically to cars from databases, or by using cameras to read road signs. It then deploys one of three controls to slow drivers:

British Transport Secretary Patrick McLoughlin is said to have “erupted” when the proposals landed on his desk and has told his officials to block the moves.

According to the DOT the proposed speed limiter rule is slated to be sent to Secretary of Transportation Anthony Foxx for approval this month and then sent to the White Houses’ Office of Management and Budget in June. If it succeeds, the rule could be published as a Notice of Proposed Rulemaking in October. Fleets love them, and drivers hate them. But one thing is sure – the debate is not likely to end if the proposal is enacted. In fact, that’s when it will begin.