A new survey finds that 66 percent of teens believe their parents follow different rules behind the wheel than they set for their young drivers.

The survey by Liberty Mutual Insurance and SADD (Students Against Destructive Decisions) finds an alarming percentage of teens report their parents make poor and risky decisions while driving. 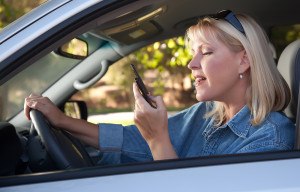 According to more than 1,700 teens surveyed countrywide, dangerous driving behaviors among parents, while their teen is in the car, range from texting or speeding to driving without a seatbelt and even under the influence of alcohol. Even more concerning, surveyed teens repeat their parents’ poor driving habits in nearly equal amounts.

The survey found teens observe their parents exhibiting the following behavior at least occasionally: 91 percent talk on a cell phone while driving, 88 percent speed and 59 percent text message while driving. With teens reporting nearly half (47 percent) of parents have driven at least occasionally without a seatbelt, 20 percent under the influence of alcohol, and 7 percent under the influence of marijuana, the survey reveals parents may not be the best role models for their teens behind the wheel. This, despite teens reporting in past Liberty Mutual/SADD research that parents are their primary driving influence.

Given the high percentage of teens who report their parents engage in unsafe driving behavior while their teen is in the car, it follows that two-thirds (66 percent) of teen drivers report their parents live by different rules than the ones they expect of their teens. With so many parents not abiding by their own safe-driving rules of the road, a “do as I say, not as I do” policy may be undermining the parent/teen driving relationship.

“The best teacher for a teen driver is a good parental role model,” said Stephen Wallace, senior advisor for policy, research and education at SADD. “Parents and teens should have an active and ongoing dialogue about safe driving behavior and take the conversation one step further by signing a Parent/Teen Contract. But parents have to demonstrate good driving behavior from the onset so new drivers understand that safe driving rules apply to everyone equally.”

The distracted driving behavior reported by teens mirrors the poor driving habits of their parents in nearly equal amounts. Among the more than 1,700 teens surveyed, a high percentage report making poor decisions while driving. In fact, 90 percent of teens report talking on a cell phone while driving and 94 percent of teens speed (at least occasionally), with nearly half (47 percent) of teens speeding often or very often. Nearly 80 percent of teens report sending text messages while driving, 16 percent have driven after using marijuana, 15 percent have driven under the influence of alcohol and 33 percent report driving without a seatbelt.

The link between the observed and self-reported driving behaviors reveals parents are modeling destructive driving behavior, and their teens follow suit. The following is a side-by-side comparison of the survey data reported when teens were asked how frequently they engage, and witness their parents engaging, in the following behavior:

“These findings highlight the need for parents to realize how their teens perceive their actions,” said Dave Melton, a driving safety expert with Liberty Mutual Insurance and managing director of global safety. “Your kids are always observing the decisions you make behind the wheel, and in fact have likely been doing so since they were big enough to see over the dashboard. You may think you only occasionally read a text at a stop light or take the odd thirty-second phone call, but kids are seeing that in a different way. Answering your phone once while driving, even if only for a few seconds, legitimizes the action for your children and they will, in turn, see that as acceptable behavior.”

The new Liberty Mutual/SADD survey found that few teens will speak up and ask a parent to stop engaging in distracting behaviors while driving. For example, only 21 percent of teens say they would ask their parents to stop driving while under the influence of alcohol. However, when teens do speak up, nearly three-quarters (70 percent) report their parents listen and change their poor driving behavior.

Liberty Mutual Insurance and SADD encourage parents and teens to consider signing a Parent/Teen Driving Contract. The Contract is both a conversation-starter about safety issues and a customized agreement that lets you create and uphold family driving rules. To download a contract, visit www.LibertyMutual.com/TeenDriving.

Liberty Mutual Insurance and SADD commissioned ORC International to conduct a qualitative and quantitative methodology to measure teen driving attitudes and behaviors. The study was initiated with a series of four focus groups held in Boston, Mass., and Atlanta, Ga., from January 30 – February 1, 2012, followed by a survey of 1,708 eleventh and twelfth graders from across the country. Overall the findings from the study can be interpreted at a 95 percent confidence interval with an error margin of + 2.16 percent. Error margins for subsets such as licensed drivers will be wider.