A small copper theft can lead to an enormous claim – literally making a mountain out of a mole hill. Whether residential or commercial, the typical copper theft involves a few pounds of copper with scrap value in the hundreds of dollars.

The actual claim, however, is typically in the thousands or even tens of thousands of dollars due to damage done ripping out the plumbing, air conditioning, wiring and sprinkler systems.

Copper theft is unique in that even if the insurer makes a full recovery of the stolen goods, the copper recovered does almost nothing to mitigate the actual loss.

One such example involves a supermarket “superstore” recently hit by copper thieves in the Southwest. The thieves cut out the copper coils from the store’s rooftop HVAC units. The scrap value of the coils was under $1,800, but the resulting claims topped $250,000 and included replacing the HVAC units, repairing parts of the rubber roof damaged by HVAC oil, and dealing with spoiled frozen foods. Additional claims addressed disruption to the actual business of selling groceries.

Substantial losses can occur when a copper theft involves an older cooling system. One such occurrence in an older supermarket in the Northeast resulted in an R12 Freon leak. Because R12 is now a controlled substance the insurer was forced to upgrade the store’s entire cooling system to a newer generation of refrigerant.

These thefts aren’t strictly limited to commercial and governmental property.

Copper thieves routinely destroy walls and ceilings in residential homes while stripping wire and plumbing. In one particularly expensive incident, crooks burned off insulation in the process of removing wiring, creating soot that covered the entire home by the time they finished. While the damage was estimated in the tens of thousands of dollars, the scrap value of the copper taken was worth less than a thousand dollars. 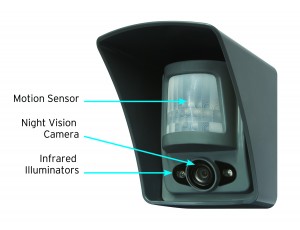 The alarms helped the Detroit Public School Police Department, responsible for protecting over 230 facilities spread throughout Detroit’s 143 square miles. Recent declining population and student enrollment required that some buildings be closed for renovation or resale.

The vacant buildings became targets for copper thieves looking to strip them of their copper wiring, pipes, and other fixtures. The old schools have many possible several points of access making them extremely difficult to secure against creative thieves. Crooks have even used the sewer systems and heating tunnels to enter and strip the vacant buildings of their copper. The school district bore an enormous cost to bring the damaged buildings back up to code.

Because budgetary pressures meant that adding officers or more expensive technology would be unrealistic, in mid-2009 police chief Robert Grimes made the decision to use inexpensive video intrusion alarms to protect the vacant buildings. The battery-powered wireless alarms sent video clips of the intruders over a cell phone network for immediate action. The results exceeded expectations, with one officer making over 150 arrests since the program began.

The video intrusion alarm used by the Detroit Public Schools utilizes an apple-sized device, called a MotionViewer, which can detect a break-in with a PIR motion sensor. The on-board camera, equipped with infrared night vision, immediately sends a short 10 second video clip of the intruder over the cell phone network to a central alarm monitoring station. The monitoring station operators review the video to confirm the alarm is real, and then call the Detroit Public Schools police dispatch while emailing the video clips to an alert list (in this case, to the cell phones of executive deputy chief Schwartz and his team of K-9 officers).

“I was surprised by the quality and resolution of these inexpensive cameras. They are giving us actionable video in total darkness where we can, at times, obtain descriptions of those we are looking for and provide them to the responding officers,” Schwartz stated.

Minutes after a break-in, the K-9 officers respond to what they know is an actual burglary. The short video clip of the burglar on their cell phone has proven invaluable in making arrests, because officers responding to the scene already have a visual description of the perpetrators.

Law enforcement see video intrusion alarms as a game changer in the fight against copper thefts. 911 dispatch centers have created special dispatch codes that designate video alarms for high-priority response, treating them as a crime-in-progress.

The Insurance Loss Control Association (ILCA) and Property Casualty Insurers Association of America (PCI) recently had the Central Station Alarm Association (CSAA) present at their annual meetings. The topic was rebuilding the insurance/alarm partnership. One proposal involves uniting insurers, law enforcement and security companies together at a county level to develop guidelines useful to underwriters for specific markets. Another proposal involved forming a security/insurer work group to analyze loss data for specific applications, such as construction, and create guidelines for minimum requirements needed to summon police response.

The alarm industry is working hard to reach out to insurance industry associations to educate members and solicit support in an attempt to resurrect a partnership that worked well in the past – security companies installed alarms, police made arrests, and insurers reduced losses.

Keith Jentoft is president of RSI-Videofied and co-chair of the CSAA Insurance Liaison Committee. Actual copper theft videos can be viewed at www.coppertheft.info.