Illinois lawmakers have convened a task force to investigate a spike in the theft of recyclable metals.

There was a spike in thefts a few years ago when the price of copper and other recyclable metals rose. Copper wiring and pipes have been ripped from homes, signs and air conditioners have been stolen, and even metal grates over storm drains have been taken.

As a result, the Recyclable Metal Theft Task Force formed, in an effort to look into what can be done about all recyclable metals. Bartonville Police Chief Brian Fengel, who sits on the task force, told the (Peoria) Journal Star that it’s working with law enforcement, utilities, the scrapping industry and insurance associations to determine how the thefts can be reduced. 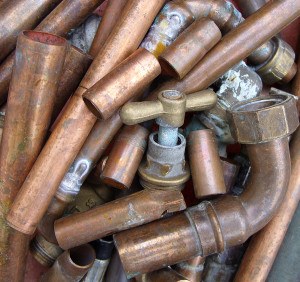 Potential ideas are enforcing tougher prosecution and establishing better lines of connection between scrap yards and police. Fengel said a report is due in the fall.

Detective Dave Hoyle of the Peoria County Sheriff’s Office supports an approach similar to the one used to combat methamphetamine manufacturers. He believes scrap metal can be monitored in the same way authorities track the purchase of cold medicine, which can be used by meth makers for ingredients.

Chad Batterham of the Peoria Police Department said law enforcement officials often have a sense of who’s stealing recyclable metals. He says it’s a specialized and hard way to make a living.

The law enforcement official said a small 2-pound coil of copper wire from a truck usually goes for about $10 to $12 and an air conditioner that’s been completely stripped can yield about $100.

The theft of copper alone has amounted to a loss of as much as $500,000 per year across Illinois.